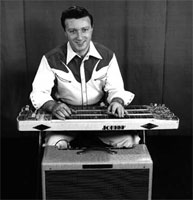 US Steel Guitarist Country born John Robert Hughey, on December 27, 1933 in Elaine (Arkansas). John Hughey was given a Gene Autry flat-top guitar when he was nine years old, but in his teens switched to steel guitar. He initially joined the Phillips County Ramblers and later joined Slim Rhodes And Mother’s Best Mountaineers when their steel player was drafted to Vietnam and stayed with them for 15 years. In 1968 he met up with his childhood friend Conway Twitty and became a member of Twitty’s backing band, the Lonely Blue Boys. His steel guitar playing was featured on Twitty’s first US country number 1, ‘Next In Line’. The Lonely Blue Boys evolved into the Twitty Birds and for a time, also included John’s brother, Gene. His steel guitar with its ‘crying’ sound was featured on most of Conway’s chart-topping singles, but by 1980 Hughey was becoming frustrated. Twitty had sold the franchise for his souvenirs to another company and so his backing musicians no longer received their percentage cut on the sales. Twitty was also moving away from the steel guitar and after several unhappy years, Hughey finally left in 1988. He worked for Loretta Lynn for a year and later collaborated with Vince Gill. His session work included two albums with Elvis Presley (From Elvis In Memphis and Back In Memphis) as well as albums with Joe Diffie, Alan Jackson, Reba McEntire, Dean Martin and Dolly Parton. He also recorded and toured with the Nashville-based session players ‘supergroup’ the Time Jumpers. It is deceased on November 18, 2007 of a heart attack.