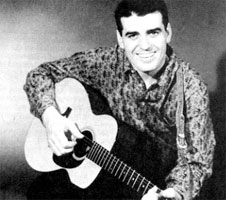 Mark Dinning will probably always be remembered for "Teen Angel," his teenage death rock classic from 1960. The sad ballad rose to the top of the charts in the U.S. It also made quite an impression in the U.K., where it made it into the Top 40 even though radio stations there considered the single morbid and banned it. Less well-known is the country career Dinning cultivated earlier, recording such songs as "Ramblin' Man," "The Streets of Laredo," and "I'm Just a Country Boy."
A native of Oklahoma, Dinning took up the electric guitar at the age of 17. MGM Records gave him a record deal in 1957, thanks to Wesley Rose, a Nashville publisher who liked what he heard when Dinning auditioned for him. A few years later, Dinning got a hold of "Teen Angel," which was written by Jean Dinning, one of his three sisters who had performed in a trio known as the Dinning Sisters from the early '40s through the 1950s.
While growing up in Oklahoma's Grant County, Dinning was one of nine children. Sisters Lou and Ginger, who was Jean's twin, were also in the Dinning Sisters trio. The singer suffered a heart attack and passed away in 1986.