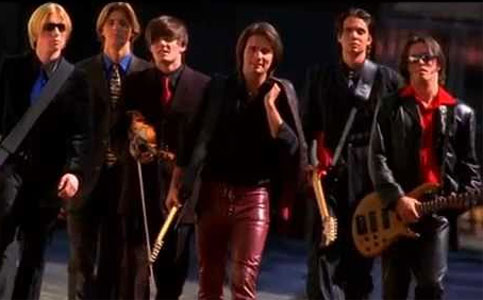 The Clark Family Experience hit paydirt in 2001, when their song "Meanwhile Back at the Ranch" became the 13th best-selling single in country music. Part of the appeal was the group's fusion of country and pop, but the fact that all six members were brothers certainly didn't hurt. The Clark Family Experience eventually morphed into Sons of Sylvia, a slimmed-down version of the band that released a hit album in 2010.
The Clark Family Experience was comprised of the six eldest children of traveling ministers Freddy and Sylvia Clark. Alan (guitar/vocals), Aaron (electric bass/vocals), Adam (mandolin/vocals), Ashley (fiddle), Andrew (drums), and Austin (lap slide guitar/keyboards) were born and raised in southern Virginia, where they started performing professionally in 1993. Nearly a decade later, Curb Records inked the Clark Family Experience a record deal. They went on to perform on TNN's weekly special The Oak Ridge Boys: Live from Las Vegas and made multiple appearances on Prime Time Country. Opening slots for Faith Hill, Martina McBride, AC/DC, Charlie Daniels, the Dixie Chicks, and Tim McGraw allowed the boys to grow in a live setting, as did two summers with the George Strait festival tour.
The Clark Family Experience gained momentum in the new millennium as Tim McGraw joined them in the production of their first studio album. The Clark Family Experience was released in August 2002 and became modestly successful, with "Meanwhile Back at the Ranch" received the most accolades. The acclaim was short-lived, though. Within a year, the boys had been dropped from their label and plunged into bankruptcy, and it wasn't until the formation of the Clark Brothers (which, after a name change, became Sons of Sylvia) that the Clarks regained their status as a country stars.