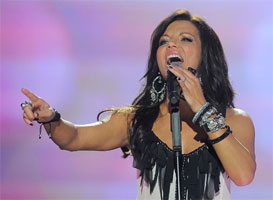 Contemporary country singer Martina McBride rose to stardom in the late '90s, starting out with a more traditionalist approach and later moving into pop-friendlier territory. She was born Martina Mariea Schiff in Medicine Lodge, KS, in 1966 and discovered country music through her father, who led a local band called the Schifters. By her teen years, she was singing and playing keyboards with the Schifters, and after high school she gigged around Kansas with several different bands. She married soundman John McBride, and in 1990 the couple moved to Nashville, where John worked for artists like Charlie Daniels and Ricky Van Shelton; Martina, meanwhile, worked as a demo singer, and her husband produced her demo tape, which got her signed to RCA in 1991. Around the same time, John was hired as Garth Brooks' production manager, which helped land Martina an opening slot on tour with Brooks. Her debut album, The Time Has Come, was released in 1992, offering a set of songs indebted to traditional honky tonk and progressive-minded country-folk. The pop-inflected 1993 follow-up, The Way That I Am, was her commercial breakthrough, with the lead single "My Baby Loves Me" zooming up the country charts to the number two position. The affecting story-song "Independence Day" became something of a signature number, and another single, "Life #9," also reached the Top Ten.
McBride's 1995 follow-up, Wild Angels, gave her a second Top Five hit in "Safe in the Arms of Love," and its title track became her first-ever number one single. 1997's Evolution became her first Top Ten country album, and the Jim Brickman duo "Valentine" not only went Top Ten, but crossed over to become her first big hit on the adult contemporary charts. Evolution went on to spawn two number two hits ("Happy Girl" and "Whatever You Say") and two number one hits ("A Broken Wing" and "Wrong Again"), and sold over two million copies, launching McBride into the top rank of country stardom. She issued a Christmas album in late 1998 and returned with a proper follow-up, Emotion, in 1999. Its lead single, "I Love You," hit number one country and also crossed over to adult contemporary radio, and the follow-ups "Love's the Only House," "There You Are," and "It's My Time" were all successful as well (the first two also reached the Top Ten). 2001's Greatest Hits compilation was the first McBride album to top the country charts, and sold well enough to make the pop Top Five as well. It contained four new tracks, all of which were eventually released as singles; "Blessed" hit number one, and "When God-Fearin' Women Get the Blues" and "Where Would You Be" both reached the Top Ten. Martina from 2003 celebrated womanhood, while Timeless from 2005 was a collection of country classics; both became Top Ten album hits, the latter reaching number three. Waking Up Laughing appeared in 2007 from RCA Records. The CD/DVD set Live in Concert was issued in 2008, followed by Shine in 2009 from RCA. McBride next moved to the Republic Nashville label, which released her 11th studio album, the aptly named Eleven, in 2011. Returning to the studio at the end of 2013, McBride started recording her 12th album, 2014's Everlasting. Produced by Don Was, Everlasting was a departure that found McBride singing mainly soul and R&B covers, including Aretha Franklin's "Do Right Woman, Do Right Man" and the Supremes' "Come See About Me," and featured a duet with Kelly Clarkson on Etta James' "In the Basement." The album appeared on Kobalt Records in April 2014, debuting at number one on Billboard's Country Albums charts.
In 2015, McBride signed to Nash Icon, Scott Borchetta's imprint for veteran country artists. She recorded Reckless with producers Dann Huff and Nathan Chapman, and the album appeared in April 2016.