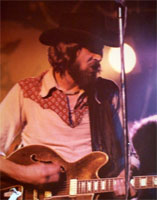 Texas singer/songwriter Rusty Wier found a gold mine when he wrote "Don't It Make You Wanna Dance." More than half a dozen different singers recorded the song, including Chris Le Doux, Jerry Jeff Walker, and Barbara Mandrell. But it was Bonnie Raitt singing it on the soundtrack for Urban Cowboy that put it on the map in a big way when sales were certified as double platinum. Years earlier, his first taste of entertaining wasn't nearly as lucrative, but it did make a lasting impression.
Wier found out that he liked to bring smiles to an audience when he was just three years old and galloping on a toy stick horse among the tables of his father's Austin restaurant, accompanied by "the William Tell Overture." He hasn't stopped since, although the venues and the pay scale have changed a bit over the years. A decade after that first experience, Wier began playing drums with an outfit called the Centennials. He moved on to local rock groups Lavender Hill Express and Wig, playing with them for about a decade. When Lavender Hill Express derailed, Wier picked up a guitar and learned how to play the instrument without any formal music instruction. The self-taught guitarist, having learned how to play from nothing but an instruction book, went on to perform with numerous artists, among them the Marshall Tucker Band, Gatemouth Brown, the Charlie Daniels Band, Willie Nelson, Steve Fromholtz, Asleep At The Wheel, the Amazing Rhythm Aces, and Ozark Mountain Daredevils. At one point, his opening act was an up-and-coming country singer named George Strait. Wier, with artists such as Michael Martin Murphey and Walker, was present at the start of the movement that became known as "the Austin Sound." ABC Records was the first company to record Wier. He later inked deals with Columbia Records and 20th Century.