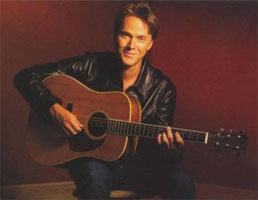 With his big voice, easy-going manner, and streamlined mainstream country-pop, Bryan White easily fit into the post-Garth Brooks climate of the mid-'90s. His first album, Bryan White, began a string of number one hits that ran into 1996.
White was born and raised in Oklahoma City, where he became involved in music in an early age. Both of his parents were professional local musicians and when Bryan was five, his father taught him how to play drums. As a teenager, he played drums in both of his mother and father's band -- his mom sang rock & roll, his father country -- which gave him a broad musical knowledge and skill. Eventually, he formed his own trio. At first, he only drummed but during a sound check his mother heard him sing "Stand By Me." After the song was over, his mother was in tears and she encouraged him to become a vocalist himself. In no time, he learned how to play guitar and began writing songs.
Following his graduation from high school, White headed to Nashville, where he hooked up with Billy Joe Walker, Jr., a family friend who happened to be a session musician in the Music City. Over the next two years, Walker helped White hone his act and helped him land a job as a demo singer. Eventually, producer Kyle Lehning, who worked with Randy Travis and Dan Seals in the past, began working with Walker and White. The three crafted Bryan White's debut album and landed the singer a record contract with Asylum. The self-titled debut appeared in 1994.
The first two singles from the record -- "Eugene You Genius" and "Look At Me Know" -- didn't gather much attention, with the latter peaking at number 24. However, in the spring of 1995, "Someone Else's Star" rocketed to number one, followed by "Rebecca Lynn" in the fall. In the spring of 1996, his second album, Between Now and Forever, was released, accompanied by the number one single "I'm Not Supposed to Love You Anymore." "So Much for Pretending" became his fourth number one single in a row in the fall of 1996. Also in the fall, he won the Country Music Association's 1996 Horizon Award, as well as their award for Best New Touring Artist. The Right Place followed in 1997, and two years later White resurfaced with How Lucky I Am. His first seasonal release, Dreaming of Christmas, appeared in 1999. Warner Bros. pulled together his four number-one hits and a handful of Top 20s for a Greatest Hits album, released in late 2000.