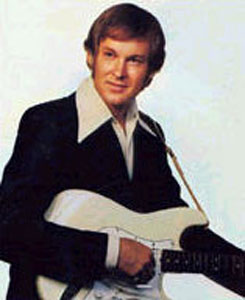 Born 19 July 1940, Jackson, Tennessee, USA. As a child Vernon heard a great deal of country music. This was largely owing to his older brother who had a regular spot on a local radio station, playing records by country musicians who were visiting town. These touring artists would sometimes drop in at the Vernon’s home, even playing impromptu sessions in the house or yard. Soon singing professionally, he found success in the mid-60s in Las Vegas, Nevada, where he secured a resident gig at the Golden Nugget. This lasted for some 15 years and Vernon wisely turned some of his steady earnings into real estate, mainly in Albuquerque, New Mexico, which is where he lived for several years. He made several records, including a cover of Buddy Holly’s ‘That’ll Be The Day’ that reached number 24 on the US charts in 1972. Among other songs in his repertoire are ‘Woman Won’t You Make Up My Mind’, ‘Oh Why Not Tonight’, ‘Ain’t That A Shame’, ‘Free Born Man’, ‘I’ll Tell You Where To Go’, ‘Raining On A Sunny Day’, ‘The Bridge Washed Out’, ‘Nashville Union Station Depot’ and ‘Up On Cripple Creek’. He also recorded some popular duets with LaWanda Lindsey, including ‘Eye To Eye’, ‘Let’s Think About Where We’re Going’, ‘Looking Over Our Shoulder’ and ‘We Don’t Deserve Each Other’.