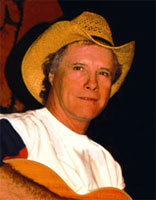 Born James J. Paulson, 25 September 1943, Rochester, Minnesota, USA. Sun listened to country and blues radio stations, hence the strong blues edge to his country music. In the early 70s, he moved to Chicago for a job in computers but he attended folk clubs along Wells Street and was further influenced by John Prine and Steve Goodman. He built up the confidence to become a performer himself, first working as Jack Daniels and then with a group, the Branded Men. During a stint as a disc jockey in Minneapolis, he was mesmerized by Mickey Newbury’s ‘Are My Thoughts With You?’ and decided to move to Nashville. He arrived in 1972 and formed his own graphics company, The Sun Shop, and then used his disc jockey experience to become a record-plugger. He helped to re-establish Bill Black’s Combo. In 1977 he worked for the newly formed country division of Ovation Records, defiantly promoting a b-side, the Kendalls’ ‘Heaven’s Just A Sin Away’, which went to number 1 in the US country chart. Ovation invited him make his own recordings and he quickly went to number 14 in the US country charts with Hugh Moffatt’s song, ‘Old Flames (Can’t Hold A Candle To You)’. He had further hits with ‘High And Dry’, ‘I Came On Business For The King’ and, with Sheila Andrews, ‘What I Had With You’. ‘Shotgun Rider’ also made the US pop charts, while his cover version of ‘The Long Black Veil’ includes an introduction from its writers, Danny Dill and Marijohn Wilkin. After Ovation went bankrupt, he moved to Elektra Records but his hard-rocking country style was poorly promoted. With his group, the Solar System, he took to touring Europe two or three times a year. His album, Hank Bogart Still Lives, is a tribute to his heroes. His favourite of his own compositions is ‘The Sun Never Sets’: ‘I don’t think I’ll do much better than that.’
Joe Sun passed away on October 25, 2019.