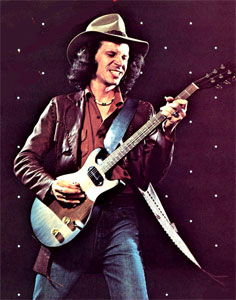 While much of what passes for contemporary country music in the '90s and 2000s sounds like reheated Eagles and Lynyrd Skynyrd, what's really annoying is what a youth-driven market it has become, leaving many great country performers of the '60s and '70s out in the cold. This is especially irritating when considering the career of Gary Stewart, one of the greatest of the hardcore-honky tonk school who, at his peak in the mid- to late '70s, could write and sing circles around just about any contemporary country star you could mention. A native of Florida, Stewart escaped a lifetime of working in an airplane factory in the late '60s by pitching some songs he'd written to soon-to-be RCA country label honcho Jerry Bradley. At the time, Stewart (who was composing with his friend Bill Eldridge) didn't aspire to more than being an in-demand Nashville songwriter, but after a couple of years writing with some success, and through Bradley's continued intercession, he was given the opportunity to record on his own. With his huge, vibrato-laden tenor voice (which sounds a bit like Jerry Lee Lewis'), Stewart, with the inestimable help of songwriter Wayne Carson, released 1975's Out of Hand, one of the finest honky tonk records of all time. Paced by the hit "She's Actin' Single (I'm Drinkin' Doubles)," Gary Stewart was quickly becoming a country music star.
Although he composed songs for traditional Grand Ole Opry stars (Cal Smith, Hank Snow), Stewart himself never emulated the traditional values espoused by the Nashville establishment; as one of his song titles stated, he was more of a "flat natural-born good-timin' man." He hung out (and caroused plenty) with Southern rock musicians, using them on his albums at a time when this was still considered radical. He was a renegade, unwilling to play the Nashville game, and his increasing success provided him with the autonomy he needed to do his own thing. However, this generally meant conspicuous excess, especially when it came to substance abuse. Still, from 1975 through 1980, Stewart's recorded work is mostly excellent, with a conspicuous high point coming in 1977 with the release of Your Place or Mine. A hard-driving slice of aggressive honky tonk, it was a rollickingly good piece of work, not the equal to Out Of Hand, but as important an assertion of Stewart's independence from the machinations of country music's star-making machinery. There were problems, however: Stewart was too country for rock audiences and too rock for country audiences, and that limited any stab at broader appeal.
In 1980, he released Cactus and a Rose, with considerable help from Southern rock vets Gregg Allman, Dickey Betts, Mike Lawler, and Bonnie Bramlett. It was a fine record, but attracted only Stewart's core audience, and at this point in his career, that simply wasn't enough. Suddenly it seemed as if his desire and creativity vanished. He hooked up with Dean Dillon and made a couple of terrible two-good-ol'-boy records that made the redneck rowdiness of Hank Williams, Jr. sound philosophical by comparison. Not long afterwards, Stewart returned to Florida and stopped recording. After his alcoholism and drug use pretty much canceled out a large part of the '80s, Stewart returned, clean and sober, with a strong comeback record, Brand New, in 1988. It wasn't the Gary Stewart of old, but it was a respectable record, and it was enough to propel a comeback that continued with I'm a Texan. Stewart released the first live album of his career in 2003 with Live at Billy Bob's Texas, an album that proved that despite his low profile he was still a formidable honky tonker. Stewart took his own life in December of 2003 following the death of his wife of 43 years in November. He was 59. His heyday was in the '70s, but Gary Stewart deserved to be celebrated for his considerable talent, tenacity, and influence.