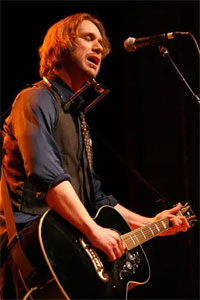 Todd Snider is perhaps the quintessential post-modern troubadour, toiling away on the folk and Americana circuits year after year, never gaining a hit but always enlarging his audience. For a while, it seemed as though Snider could ride the post-Nirvana alt-rock wave that brought contemporaries like Jill Sobule a single hit, but his 1994 debut, Songs for the Daily Planet, peaked at number 23 on Billboard's Heatseeker chart, with its accompanying single "Talkin' Seattle Grunge Rock Blues" proved not to be a novelty fluke. That very title hints at the humor that distinguishes Snider's catalog, but his lively, witty songs also dig emotionally deeper, which is why he has sustained a career for decades after that 1994 debut, sometimes cresting into the charts -- Devil You Know reached number four on the Heatseekers charts in 2006; The Excitement Plan made it to number 144 on the Hot 100 in 2009; Agnostic Hymns & Stoner Fables reached number 95 in 2012 -- but always maintaining an audience devoted to his wry quips and heart-rending ballads, a style that was showcased well on 2021's First Agnostic Church of Hope and Wonder.
Snider was born in Portland, Oregon, and grew up in Santa Rosa, Austin, Houston, and Atlanta. After moving to Memphis in the mid-'80s and establishing residency at a local club named the Daily Planet, he was discovered by singer/songwriter Keith Sykes, a member of Jimmy Buffett's Coral Reefer Band. Sykes began to work with Snider to help advance his career, and after passing on demo tapes of Snider to Buffett, he was signed to the star's Margaritaville Records. Snider's debut album, Songs for the Daily Planet, was released in the fall of 1994; "Talkin' Seattle Grunge Rock Blues" was added to the album as an afterthought only after intense lobbying by a Canadian music critic, and ultimately became a minor hit.
On his second effort, 1996's Step Right Up, Snider and his band, the Nervous Wrecks (comprised of lead guitarist and multi-instrumentalist Will Kimbrough, bassist Joe Mariencheck, drummer Joe McLeary, and keyboardist David Zollo), continued blending bluegrass, blues, folk-rock, and country-rock to forge their own distinctive sound. On his third album, 1998's Viva Satellite, Snider took a Tom Petty approach, replacing much of his acoustic setup with twang-drenched electric guitar. In 2000, he signed to John Prine's Oh Boy label and returned to his singer/songwriter roots with Happy to Be Here. He recorded three more records for the label: 2002's New Connection, 2003's Near Truths and Hotel Rooms Live, and 2004's East Nashville Skyline. A compilation, That Was Me: The Best of Todd Snider 1994-1998, was released on Hip-O in 2005, and the next year brought Snider's eighth album, Devil You Know. In 2008, Snider released the politically charged Peace Queer, an eight-song collection of anti-war songs (as filtered through Snider's signature wit and amiable pathos). The Excitement Plan appeared from Yep Roc Records in 2009. In 2011, he released the two-disc concert set Live: The Storyteller, while 2012 saw both a traditional studio outing, Agnostic Hymns & Stoner Fables, plus a tribute album, Time as We Know It: The Songs of Jerry Jeff Walker. In 2013, Snider formed the band Hard Working Americans. Between 2014 and 2016, the group released two studio albums plus a live set, while also touring extensively. But Snider returned to his solo career in the fall of 2016, releasing the album Eastside Bulldog in October of that year.
In early 2019, Snider released Cash Cabin Sessions, Vol. 3. Two years later, he returned with First Agnostic Church of Hope and Wonder, a funky set he recorded during the COVID-19 pandemic; Tchad Blake mixed the album.