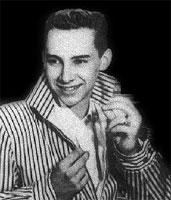 In 1961, Troy Shondell's "This Time (We're Really Breaking Up)" rode the charts for four months. Within the first week of the single's release, lovers of his swamp pop sound snatched up 10,000 copies of the record. In a single year, sales rose to more than three million copies. Shondell's influence rippled through the young rock & roll community. Up-and-coming bands named themselves after him. Tommy James, at the time a guitarist in Michigan who would later score with "I Think We're Alone Now" and "Mony Mony," had the Shondells. In Illinois, Jim Peterik, later known for Survivor and the Ides of March, dubbed his group the same. Recording for La Louisianne, Warren Storm and Rod Bernard also tipped their hat to Shondell when they named their act after him. But the million-seller was not Shondell's first shot at stardom. An earlier attempt was cut short in 1960 on Halloween when a heart attack killed his father and brought Shondell home to help his mother run the family business. Until then, he'd been making steady headway on a musical career that started while he was still a teenager in Fort Wayne, IN. The label Smash released his first single, "My Hero," which he recorded as Gary Shelton, his real name. The Mercury Records release "Kissin' at the Drive-In" came out the following year.
Shondell seemed to be on his way, at least in the Midwest. Chicago's Brass Rail, a major nightspot that usually hosted jazz and blues acts, brought Shelton in for its first foray into rock & roll. The successful gig stretched to 16 weeks. A pair of independent releases, "The Trance" and "Goodbye Little Darlin'," came next. By 1959, the singer opened shows on a tour called Shower of Stars for such headliners as Chuck Berry, the Impalas, Frankie Ford, Frankie Avalon, and the Skyliners.
Shondell's father taught him how to handle a trumpet when Shondell was four years old. Four years later, he introduced his son to the piano. Later in life, he looked after his son's musical interests. The singer cites his dad as a major influence, along with Little Richard, Elvis Presley, and Buddy Holly. A song Shelton wrote about his father's passing, "Still Loving You," became a hit in country music circles when it was recorded by Bob Luman.
At the turn of the new millennium, Shondell was still performing at nostalgia shows and other events. From his home in Nashville, he also composed and produced. Along with Jimmy Clanton, Ronnie Dove, and Ray Peterson, he was a member of the Masters of Rock 'n' Roll. Shondell died in Picayune, Mississippi on January 7, 2016 at the age of 76.