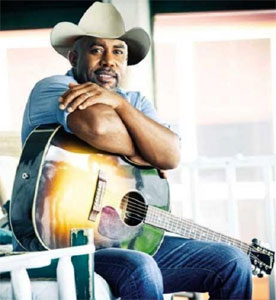 As the frontman of Hootie & the Blowfish, Darius Rucker was one of the most popular frontmen in mainstream pop/rock during the mid-'90s. The band's debut album, Cracked Rear View, was virtually inescapable in 1995, eventually selling more than 16 million copies and becoming one of the most successful albums of all time. Hootie & the Blowfish couldn't re-create that magic on future records, though, and the group took a break from the studio after releasing 1998's Musical Chairs. Rucker used his free time to launch a solo career, which has allowed the singer to explore his R&B and country influences.
Growing up in Charleston, South Carolina, Rucker was exposed to the sounds of Otis Redding, Al Green, and Gladys Knight at an early age. Those R&B icons helped influence Hootie & the Blowfish's recordings, all of which featured Rucker's soulful baritone at the forefront, but it wasn't until his solo career that Rucker truly paid homage to the sounds of his youth. He initially planned to launch his solo career with The Return of Mongo Slade, which was scheduled for a summer 2001 release by Atlantic Records, but contractual changes prevented the album's release. A few months later, Rucker jumped ship for Hidden Beach Recordings, which then acquired the master recordings of his debut from Atlantic.
After making a cameo in the Farrelly brothers' film Shallow Hal, Rucker introduced his mellow, R&B-influenced music with 2002's Back to Then (essentially The Return of Mongo Slade with a different title), which featured collaborations with Jill Scott and Snoop Dogg. Rucker then returned his focus to Hootie & the Blowfish, releasing two albums with the group during the early 2000s before revisiting his solo career. This time, he opted for a country approach, and the twangy Learn to Live found an appropriate home among country music fans, who sent both the album and its flagship single, "Don't Think I Don't Think About It," to the top of the Billboard country chart. "It Won't Be Like This for Long" and "Alright" also peaked at number one, pushing the album to platinum status within a year of its release. Rucker smartly stayed in the country mold for his follow-up LP, Charleston, SC 1966, which appeared in fall 2010; it also spawned two number one singles in "Come Back Song" and "This."
His third solo album in a country vein, True Believers, followed in early 2013, and it generated a massive hit in the form of "Wagon Wheel," a number one country single that crossed over to 15 on the pop charts on its way to triple-platinum certification. As he prepped a fourth country long-player, Rucker released the "Homegrown Honey" single in the fall of 2014, along with the seasonal album Home for the Holidays. Southern Style appeared in March 2015; it debuted at number one on Billboard's country chart but didn't generate a second big hit. "If I Told You," the lead single from his next album, appeared in July 2016, but it took Rucker another full year to finish the record. Preceded by the summer single "For the First Time," the album When Was the Last Time appeared in October 2017, entering the Country Album chart at two and the Hot 100 at eight.
Hootie & the Blowfish reunited for a 25th anniversary tour of Cracked Rear View in 2019. That same year brought a new album from the group called Imperfect Circle; it peaked at number 26 on the Hot 100. Rucker returned to his solo career in August 2020 by releasing "Beers and Sunshine," the first single from his sixth solo album. The song debuted at number 24 on the Billboard Country Airplay chart, making it his highest debut to date, and was certified gold in Canada.