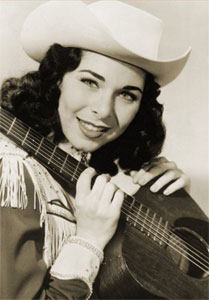 US Country singer born Miriam Lapolito Rothman, April 20, 1935 in Salinas, California. Mimi Roman never had a hit when she was recording for Decca in the late '50s but it wasn't for lack of trying. Working with legendary country music producer Owen Bradley, Roman tried out many different kinds of sounds within the country-pop spectrum before giving up and retiring at an early age. It was a sudden end to a career, an end that seemed too fast considering Roman's showbiz roots. She was the daughter of a Rockette and, as a kid, she showed an interest in performing and in country, combining the two when she became National Rodeo Queen at New York's Madison Square Garden. Soon, she was appearing on local New York television, including Arthur Godfrey's Talent Scouts, and a management deal soon followed. In 1955, she began playing country bills, making her way to the Grand Ole Opry, then landing a record deal with Decca in 1954, who had her switch her surname from Rothman to Roman. During 1956 and 1957 she performed and recorded regularly, usually under the direction of producer Owen Bradley, cutting a bunch of sweet and swinging country tunes. She never had a hit and missed her opportunity to record "Walkin' After Midnight" -- it went to Patsy Cline instead -- and after stockpiling several singles that didn't chart and sides that weren't released (all collected on Bear Family's 2012 set I'm Ready If You're Willing, which contains annotation by Todd Everett), she headed back to New York City. She sang with Pee Wee King for a while but essentially retreated to N.Y.C., cutting a little music for Kapp and Warner before settling in as a demo singer and performing in local clubs.