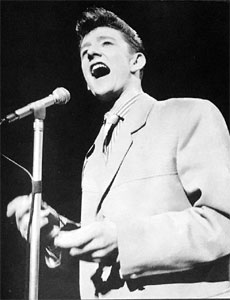 Dickie Pride, one of the singers signed to Larry Parnes' stable of artists in the late '50s, enjoyed one brief week of chart success in 1959 with the song "Primrose Lane." He was born Richard Charles Knellar in Thornton Heath on October 21, 1941. As a young boy he won a scholarship to the Royal College of Church Music in Croydon and had a fine operatic voice, but like many young men at that time, he preferred popular music and formed his own skiffle group called the Semi-Tones. While performing one night at the Castle pub in Tooting, South London, his singing was heard by Russ Conway, who was so impressed that he recommended him to Parnes, who signed him on the spot. After the obligatory name change (which all of Parnes' singers had to do), he entered the professional world as Dickie Pride -- still only 16 years old -- with a first gig at the Kilburn Gaumont cinema, at that time the biggest cinema in the country. The Record Mirror wrote of his performance that "he ripped it up from the start," and he so shook up the theater that he became known as "the Sheik of Shake." Norrie Paramore signed him to the Columbia Records label and he made his TV debut on Jack Good's Oh Boy in February of 1959. He made several appearances on the flagship pop music show and also on a new Jack Good-produced program for ATV called Wham, which featured future hitmakers including Billy Fury, Joe Brown, Johnny Kidd & the Pirates, Jess Conrad, and the Vernons Girls.
Unable to find a song that would launch him into the big time, Larry Parnes and Norrie Paramore supplied the song "Primrose Lane," a ballad that just scraped into the charts for one week at number 28 in October 1959, and despite his obvious talent for singing live, it never transferred successfully to recordings. One final attempt was made in 1961 with an album of Tin Pan Alley standards featuring the Ted Heath Orchestra; called Pride Without Prejudice, the LP was intended to position him as a mainstream all-around entertainer. When it sold very badly, he was dropped by Larry Parnes and his life moved from one drug-addicted problem to another, attempting to form several groups including the Guvnors and the Sidewinders. However, finding work and any sort of commercial success eluding him, he fell deeper into heroin addiction and died on March 26, 1969, just 27 years of age, from an overdose of sleeping pills. Many of the stable of Larry Parnes' artists, including Billy Fury and Joe Brown, were devastated, claiming that out of all of them, Dickie Pride had been the most talented and the best singer, but fate had decreed it just wasn't to be.