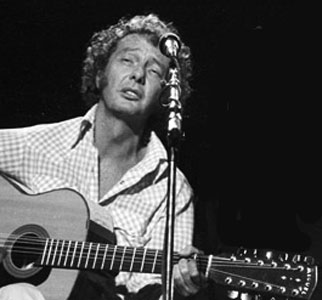 US Folk singer born March 16, 1936 in Cleveland (Ohio). Moody, bluesy, and melodic, Fred Neil was one of the most compelling folk-rockers to emerge from Greenwich Village in the mid-'60s. His albums showcased his extraordinarily low, rich voice on intensely personal and reflective compositions, sounding like a cross between Tim Buckley and Tim Hardin. His influence was subtle but significant; before forming the Lovin' Spoonful, John Sebastian played harmonica on Neil's first album, which also featured guitarist Felix Pappalardi, who went on to produce Cream. The Jefferson Airplane featured Neil's "Other Side of This Life" prominently in their concerts, and dedicated a couple of songs ("Ballad of You and Me and Pooneil" and "House at Pooneil Corner") to him. On the B-side of "Crying" is Neil's "Candy Man," one of Roy Orbison's bluesiest efforts. Stephen Stills has mentioned Neil as an influence on his guitar playing. Most famously, Harry Nilsson took Neil's "Everybody's Talkin'" into the Top Ten as the theme to the movie Midnight Cowboy.
For all his tangential influence, Neil himself remained an enigmatic, mysterious figure. His recorded output was formidable but sparse. During 1964 he recorded as a duo with Vince Martin, which yielded an album for Elektra, Tear Down the Walls. His drumless solo debut, Bleecker & MacDougal (which did have additional instruments), ranked as one of the best efforts from the era in which folk was just beginning its transition to folk-rock. The bluesiest of his albums, it contained some of his best songs, including "Little Bit of Rain," "Other Side of This Life," and "Candy Man." His true peak was his follow-up, Fred Neil, which made a full transition to electric instruments. Less bluesy in tenor, it featured "Everybody's Talkin'," as well as an equal gem in "The Dolphins."
Neil's subsequent slide into obscurity was strange and quick. Sessions, from 1968, was a much more casual and slapdash affair that included some instrumental jamming. Always a recluse, he retreated to his home in Coconut Grove, FL, after achieving cult success, and didn't release anything after a live album in 1971. His obscurity was enforced by an absence of domestic compact-disc reissues of his best work, a situation rectified with a superb best-of compilation by Collectors' Choice and the 2001 reissue of Tear Down the Walls/Bleecker & MacDougal by Elektra. He continued to play, but only for those close to him. Neil, ill with cancer, unexpectedly passed on July 7, 2001, at his home in Florida.