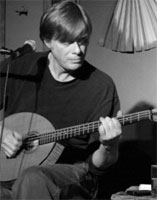 Best known as one half of the acclaimed new traditionalist country duo the O'Kanes, singer/songwriter Kieran Kane was born in Queens, NY, on October 7, 1949; by age nine, he was drumming in his older brother's rock band, while in his teens he turned his focus to bluegrass and folk, performing at festivals throughout the Northeast. At 21, Kane relocated to Los Angeles, where he labored as a songwriter and session guitarist; by the late '70s he had moved on to Nashville, where he landed a writing contract with Tree Publishing Co. A deal with Elektra followed, but despite notching a pair of Top Ten country singles -- "You're the Best" and "It's Who You Love" -- he found himself at odds with the label and soon returned to composing. Teaming with fellow Tree staff writer Jamie O'Hara, he formed the O'Kanes in 1985, issuing three hit albums and scoring a half-dozen Top Ten singles before disbanding four years later. Kane resurfaced with a more austere, folk-influenced sound in 1993 with the solo effort Find My Way Home, issued on Atlantic; soon after he formed the Nashville-based indie label Dead Reckoning with fellow singer/songwriters Kevin Welch, Tammy Rogers, and Harry Stinson, issuing the album Dead Rekoning in 1995. Six Months, No Sun followed in 1998, and Blue Chair was issued in fall 2000. In 2002 Kane released the primarily acoustic Shadows on the Ground, a pared-down collection of plaintive, powerful, and heartbreaking songs dedicated to his son Lucas, who had been diagnosed with Hodgkin's disease. You Can't Save Everybody (2004), Lost John Dean (2006), and Kane Welch Kaplin (2007) found Kane collaborating with Nashville crooner Kevin Welch and multi-instrumentalist Fats Kaplin on a series of spare, moody originals and covers, while 2009's Somewhere Beyond the Roses was backed by a bass-less quartet held down by Lambchop's Deanna Varagona.