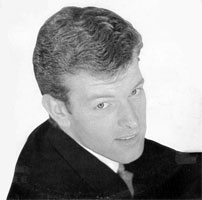 British Rock 'n' Roll singer, born James Little, December 15, 1939, Carlshalton, Surrey, England. Justice signed to Pye Records in 1960, owing partly to fellow stable-mate singer, Emile Ford, who had spotted Jimmy singing in a coffee bar. When Justice’s first two releases failed in the UK, he relocated to Sweden where his cover of the Jarmels’ ‘Little Lonely One’ charted. In 1962 with the help of producer Tony Hatch, he strung together three UK Top 20 hits: the remarkably fresh cover version of the Drifters US hit ‘When My Little Girl Is Smiling’, ‘Ain’t That Funny’ - an original song penned by Johnny Worth - and ‘Spanish Harlem’. Justice spent 1962 commuting between England and Sweden (where he had many previous bookings to honour) but managed, together with his group the Excheckers, to join a Larry Parnes UK tour headed by Billy Fury and Joe Brown. This white singer who possessed a mature, soulful voice, was sometimes called ‘Britain’s Ben E. King’, and caused some controversy when he covered King’s ‘Spanish Harlem’ with an uncannily similar Vocals style. Justice also recorded for Decca Records in 1969, RCA Records in 1968 and B&C in 1972.