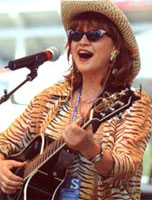 Nashville-based singer/songwriter and musical humorist Kacey Jones mixes standup comedy and country music into an intoxicating brew that has landed her features in People magazine and USA Today, as well as stints on NPR's Prairie Home Companion, sitcoms, and movie soundtracks. The San Francisco Bay area native released her debut record, Men Are Some of My Favorite People, in 1997. It was followed by a series of albums — Every Man I Love Is Either Married, Gay or Dead, Never Wear Panties to a Party, Sweet Potato Queens' Big-Ass Box of Music, Kacey Jones Sings Mickey Newbury — that drew on her strengths as an observational humorist, composer, talented singer, and interpreter of the human condition.