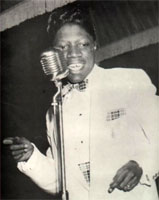 The Los Angeles R&B Vocals group scene of the 1950s was a fairly incestuous one -- members flitted from one aggregation to the next, often sporting several connections at the time. Young Jessie was a member of the Flairs, Hunters, and Coasters, as well as scoring a solo West Coast hit with his 1955 rocker "Mary Lou."
Obediah Jessie was a Los Angeles high-school classmate of Richard "Louie Louie" Berry. The two put together the Flairs and debuted on the Bihari Brothers' Flair label in 1953 with "She Wants to Rock." the Flairs recorded steadily for the firm, but solo status awaited Jessie, who cut a cover of Big Mama Thornton's Leiber/Stoller-penned "I Smell a Rat" for Modern (the Biharis' flagship logo) in 1954. "Mary Lou," arranged by saxist Maxwell Davis, emerged the next year; its unusual minor-key arrangement must have appealed to rockabilly wildman Ronnie Hawkins, who hit the pop lists with it in 1959 for Roulette.
Platters manager Buck Ram took over Jessie's career in time to pen his torrid 1956 rocker "Hit, Git & Split" under the sobriquet of Lynn Paul. Both that cut and its follow-up, "Oochie Coochie," stemmed from a New York date that backed Jessie with Mickey Baker on guitar and saxman Sam "The Man" Taylor.
Jessie reverted to his Vocals-group roots in 1957, joining the Coasters to sing harmonies on their smashes "Searchin'" and "Young Blood" for Atco. The same firm issued a solo Jessie 45, "Shuffle in the Gravel," before moving him to Atlantic for "Margie."
Later singles for Capitol and Mercury did little to rekindle Jessie's career, though the Mercury 45s sported some impressive credits. "Be-Bop Country Boy" was produced by ex-Little Richard/Sam Cooke cohort Bumps Blackwell, while a remade "Mary Lou" found Jessie collaborating with a trio of Phil Spector associates: Jack Nitzsche arranged, and Lester Sill and Steve Douglas co-produced.