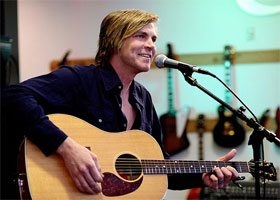 The Texas-based modern-day honky tonker Jack Ingram first carved out a niche for himself in the bars and roadhouses between Dallas and Houston. By the mid-'90s after extensive touring with his Beat Up Ford Band, he had released two well-received independent albums and had opened for artists like Merle Haggard and Mark Chesnutt. The end of 1996 brought about a deal with Warner, which reissued his first two indie albums, and in 1997 issued his major-label debut, Livin' or Dyin'. Moving to Sony's Lucky Dog label in 1999, Ingram released his fifth roots rock album, Hey You. Three years later, he hooked up with Lee Ann Womack's producer, Frank Liddell, for Electric. Young Man, a compilation of recordings of many of his earliest songs, and Live at Gruene Hall: Happy Happy both arrived in 2004. Live Wherever You Are, a live recording featuring two studio singles, was released in 2006 and was his first for Big Machine Records, a label operated by record executive Scott Borchetta and fellow country crooner Toby Keith. A second release from Big Machine, called This Is It, followed in 2007. Big Dreams & High Hopes appeared in 2009.