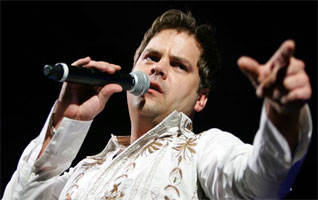 Born and raised in Dallas, TX, country vocalist Steve Holy was the youngest of eight children and entertained his grade school classmates with his imitations of Conway Twitty. At 19, he auditioned for the local Mesquite Opry and later earned a spot on Johnny High's Country Music Revue, eventually garnering the revue's Entertainer of the Year award. This brought the attention of legendary country producer Wilbur Rimes (and his daughter LeAnn), who encouraged Holy to shop himself around Nashville. Curb Records signed the young singer/songwriter in 1999 and his Wilbur Rimes-produced album, Blue Moon, was released in late 2000. Brand New Girlfriend arrived in 2006.