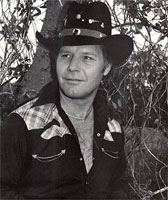 Bassist Doyle Holly was a key member of Buck Owens' band the Buckaroos -- and, by extension, he, Owens, and guitarist Don Rich were at the core of what became known nationally through their efforts as "the Bakersfield sound." He was born Doyle Floyd Hendricks on June 30, 1936, in Perkins, OK. He spent four years in the United States Army. Near the end of the 1950s, after completing his uniformed service, he headed for California, figuring to pick up some work in the oil fields, and he ended up in Bakersfield, where he was amazed and delighted to find a thriving music scene, coalescing around honky tonk-style country music and early rock & roll.
Using the name Doyle Holly, he started playing guitar and bass at night at the local clubs. He was good enough so that by the early '60s he was working in Johnny Burnette's band, among other rock & roll and country outfits. He was playing with guitarist Joe Maphis in 1963 when Don Rich, the guitarist for Buck Owens' Buckaroos, approached him about joining Owens' outfit. He came aboard just as Owens and his band were entering what became their most successful and influential period -- lofting more than two dozen singles into the upper reaches -- most right to the number one spot -- of the country charts between 1963 and 1971. Owens became a household name and the band and its Bakersfield sound became a distinct counterweight, with their lean, gritty sound, to the smooth countrypolitan coming out of Nashville at the time.
Holly and Owens had a love/hate relationship across much of that time -- as the bassist later recalled, Owens would fire him at least once each month in the course of their dealings with each other. But at the end of the day, he was back, and he was aboard when the band, along with its leader, made the successful leap to national television on the variety show Hee Haw. During the second half of the 1960s, Holly received several nominations from the Academy of Country Music as Bass Player of the Year, and he finally won in 1970. The following year, believing that he had taken his work with the Buckaroos as far as it could go, Holly left the Buckaroos and formed a band of his own, called the Vanishing Breed. They were signed to Barnaby Records, cut a pair of LPs, and saw hits on the country charts with "Woman Truck Drivin' Fool," "Queen of the Silver Dollar," and "Lila," with the latter song the most successful, hitting number 17 in 1973.
In the early '80s, after more than two decades as a working musician, Holly decided to retire from touring. For most of the next 20 years, he was the proprietor of a guitar store in Hendersonville, TN, He rejoined the periphery of the music business after selling the store, reportedly even driving a bus on tours for Elton John and Billy Joel, and for Shania Twain. He rejoined the surviving members of the Buckaroos in 2000 for an album that reprised the group's hits in a bluegrass style, with Holly as singer. In 2000 Owens, Holly, Johnny Russell, and the remaining Buckaroos (Rich died in a motorcycle accident in 1974) began to record a bluegrass-influenced album of Buckaroo hits, with Holly on Vocalss. Holly passed away in January 13, 2007 in Nashville, TN, after being diagnosed the previous year with prostate cancer.