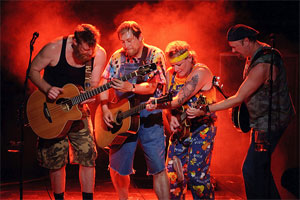 Hayseed Dixie is a novelty band that issued a tribute album to heavy metal legends AC/DC in 2001 (completely reworking the Australian band's classics as country/hillbilly rave-ups), titled A Hillbilly Tribute to AC/DC. Their sense of humor is also evident in their bio, which claims that the band hails from Deer Lick Holler, "deep in the heart of the Appalachia," where its members grew up playing the traditional hillybilly music of their forefathers. But as fate would have it, they just so happened to stumble across AC/DC's back catalog of recordings when a stranger driving through the boy's hometown crashed his car and perished, but his records were saved by Hayseed Dixie! The bandmembers of AC/DC have taken quite a liking to Hayseed Dixie, as AC/DC bassist Cliff Williams invited the band to play a set at the band's tour wrap-up party at his East Coast mountain retreat in summer 2001. Hayseed Dixie isn't the kind of group to let a smart-ass idea go to waste, and followed the AC/DC album with 2002's A Hillbilly Tribute to Mountain Love, which gave the same bluegrass treatment to assorted hard rock songs. Kiss My Grass: A Hillbilly Tribute to Kiss appeared a year later in 2003. A Hot Piece of Grass was released on Cooking Vinyl Records in 2005 and two years later, following the same theme, Weapons of Grass Destruction, which featured covers of songs by the Beatles, Judas Priest, and the Scissor Sisters, among others, came out.