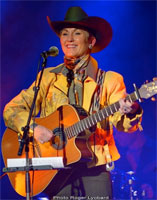 Joni Harms grew up on a ranch in Oregon where she combined an interest in singing with the life of a cowgirl. She won a talent contest sponsored by the Future Farmers of America while in high school and soon began taking trips to Nashville in search of a recording contract. She signed to record executive Jimmy Bowen's Universal label, a co-venture with MCA Records, and reached the country Top 40 in April 1989 with "I Need a Wife." "The Only Thing Bluer Than His Eyes," the follow-up single, reached the country charts in June. Bowen took Harms with him when he moved to Capitol Records in 1990 and there released her debut album, Hometown Girl, which did not chart. During the 1990s, Harms maintained her musical career while marrying, raising two children, and continuing to live and work on her family ranch in Oregon. She followed Hometown Girl with Whatever It Takes and the all-original holiday album Christmas in the Country. By 1998 she was signed to Warner Bros. Records, which released Cowgirl Dreams. She made a children's album, Are We There Yet?, accompanied by a coloring book, and also wrote and published a children's book, Stan and Bert. A second children's book, The Little Grey Donkey, appeared in the fall of 2001, as did a new country album, After All, released on her Real West Productions label through the independent record company Paras Recordings