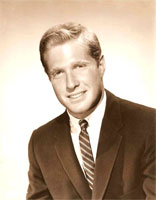 Paul Hampton (born August 20, 1937) is an American actor, singer, lyricist and writer. He is listed as one of one hundred major architects of American rock and roll in the British rock journal "Footsoldiers and Kings." While he was a sophomore at Dartmouth College, he was signed to Columbia Records and Columbia Pictures at the same time to write music with Hal David and Burt Bacharach. In 1960, with Bacharach he co-composed and performed "Two Hour Honeymoon". After this initial outing he co-wrote hits for Don Gibson ("Sea of Heartbreak"), Gene Pitney ("Donna Means Heartbreak"), Johnny Tillotson ("I Rise, I Fall")and hits for overseas artists ("Angry at the Old Oak Tree.") Also he wrote the theme for "My Mother the Car" and sang it under the group name Albuquerque. He made two albums, "Beautiful Beginnings" and "Rest Home For Children."
Some of his songs have been recorded by Sammy Davis Jr., Bette Midler, Eddy Arnold, Tom Jones, Merle Haggard, Ricky Nelson, Elvis Presley, Gene Pitney and Johnny Cash.
His film career began in 1958 starring in Senior Prom. Many television appearances ensued such as The Doris Day Show, The Smothers Brothers Comedy Hour, McCloud, Ironside, Combat!, Benson and others. Some notable movie appearances were in Lady Sings the Blues, Hit!, More Dead than Alive," and the award-winning television show Never Forget. Hampton continues to act and compose today (2010).
In 2008 Tony award winning actress and singer Idina Menzel recorded Hampton's song "Hope" for the Major League Baseball Stand Up To Cancer charitable program.
He is the ASCAP award-winning songwriter for "Sea of Heartbreak", used in the soundtrack for the films The Butcher Boy, Perfect World, Heartbreak Ridge and Clay Pigeons. In 2010 singer Rosanne Cash covered the song in a duo with Bruce Springsteen which received a Grammy nomination and was promoted as the single from her album The List.