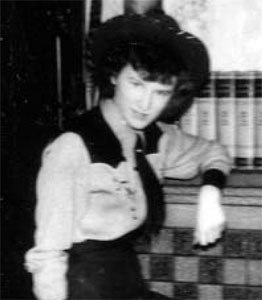 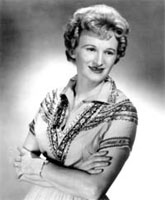 Singer/songwriter Connie Hall had a brief country music career during the 1960s, punctuated by her hits "It's Not Wrong" and "Fool Me Once." She was born in Kentucky but raised in Cincinnati, and began performing there while in her teens. After high school she worked at the Jimmie Skinner Music Center in Ohio and then became a regular singer on radio WZIP in nearby Covington, Kentucky. In 1954, Skinner on other shows for several years, and even worked as a weather girl on an area television station.
Hall's recording debut was a 1957 duet with Skinner, "We've Got Things in Common." She released her first solo effort in 1958, "I'm the Girl in the USA," and had her first hit the following year with "The Bottle or Me," which peaked near the Top 20. She moved to Decca in 1960 where producer Harry Silverstein helped her make it to the Top 25 with "Poison in Your Hand" and the Top 20 with its B-side "It's Not Wrong," a response to Warner Mack's 1958 hit "Is It Wrong (For Loving You)." She remained with Decca for three years and produced seven more respectable hits including "Sleep, Baby, Sleep" and "Fool Me Once." She also appeared on the Grand Ole Opry, Louisiana Hayride, and Midwestern Hayride.
Connie Hall died on January 7, 2021.