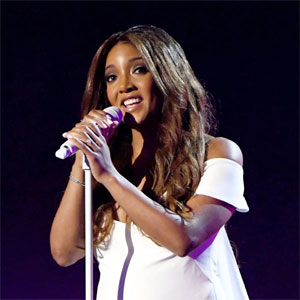 Singer Mickey Guyton is a Black female country artist with a warm, textured voice, whose sound walks the line between classic country and contemporary pop. Following her initial buzz when her 2015 debut single "Better Than You Left Me" began making its way up the radio airplay charts, Guyton gained yet wider attention when her song "Black Like Me" (off her Bridges EP) went viral in the wake of the Black Lives Matter protests of 2020. That same year, she also became the first Black female artist to perform her own song at the ACM Awards, joining Keith Urban for her socially conscious ballad "What Are You Gonna Tell Her?" Guyton finally released her first album, Remember Her Name, in September 2021.
Born Candace Mycale Guyton in June 17, 1983 in Arlington, Texas, Guyton spent much of her childhood moving with her family as her father pursued his career in engineering. Music, however, was a constant for the burgeoning performer who first began singing with her church choir at age five. Growing up, Guyton listened to a genre-crossing blend of music, including country stars Dolly Parton and LeAnn Rimes, gospel artists BeBe & CeCe Winans, and pop/R&B icon Whitney Houston. She developed a flexible vocal style, and after high school moved to California where she enrolled at Santa Monica College and began pursuing a music career. Following several years of working day jobs and performing, Guyton met Julian Raymond, an experienced producer who believed in her potential. Raymond introduced her to managers Gary Borman and Steve Moir, whose clients included Keith Urban and Faith Hill. With the support of her management team, Guyton moved to Nashville and quickly became a presence in the city's vibrant musical community. In 2011, she performed as part of a special concert at the White House, where she shared the bill with Lyle Lovett, James Taylor, Dierks Bentley, Darius Rucker, and Kris Kristofferson. She also signed a deal with Liberty/Capitol Nashville, and in 2012 received a standing ovation when she performed her song "Better Than You Left Me" at Nashville's Country Radio Seminar. The song became Guyton's debut single for Liberty, appearing on her eponymous 2015 EP Mickey Guyton; it eventually peaked at 34 on Billboard's Country Airplay, earning her the music industry bible's stamp as one of "10 Hot Country Artists to Watch in 2015." Guyton's follow-up, "Heartbreak Song," went to 45 on the same chart in 2016. More singles arrived in 2019, including "Hold On" (taken from the film Breakthrough), "Sister," and "Crazy."
In the spring of 2020, Guyton released the empowering, socially conscious ballad "What Are you Gonna Tell Her?" as the first single off her third EP Bridges. On the heels of the album's release, she became the first Black female artist to perform her own song at the ACM Awards when she joined Keith Urban to perform "What Are You Gonna Tell Her?" at the award ceremony. Another song off Bridges, "Black Like Me," gained viral attention in the wake of the Black Lives Matter protests.
"Black Like Me" anchored Remember Her Name, the long-awaited debut album Guyton delivered in September 2021.