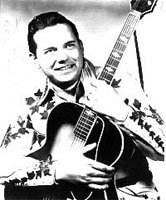 During his heyday, Charlie Gore was known as "the tall handsome guy from West Virginia." During the early '50s, he was the star of Midwestern Hayride on WLW radio and television in Cincinnati. Gore was born in Chapmanville, West Virginia and had extensive radio experience before coming to WLW. In 1952, Gore made his recording debut on Syd Nathan's King label with the song "If God Can Forgive You, So Can I," which did quite well. Between 1952 and 1956, Gore recorded 36 songs for King. In the mid-'50s, he went to work in Indianapolis on radio and television, remaining until 1959, after which he returned to West Virginia and worked as a deejay. Gore also served a term in the West Virginia state legislature, and started his own label, Blank Records, on which he recorded a few more songs. He eventually returned to Cincinnati, where he lived out the rest of his life, passing away in 1984.