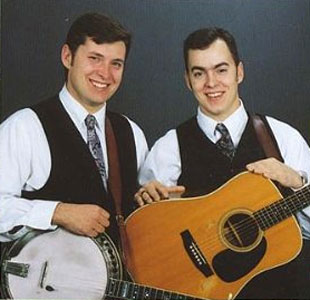 The upstate New York bluegrass group known as the Gibson Brothers is really two talented brothers and a father-and-son team who can deliver a close-knit harmony without a hitch. The brothers are writer, banjoist, and Vocalsist Eric Gibson and writer, guitarist, and Vocalsist Leigh Gibson. The father-and-son team is Junior Barber on Resophonic guitar and son Mike Barber on acoustic bass. Brothers Leigh and Eric began performing as adolescents, playing gospel instrumentals in the local church. They added singing harmonies to their act a few years later, and performed numbers by artists such as Buck Owens and Jim & Jesse. A musician by the name of Bob Fuller made sure the young brothers were exposed to the music of bluegrass greats like Red Allen, Bill Monroe, and Jimmy Martin.
In 1994, as a quartet, the Gibson Brothers recorded their debut album, Underneath a Harvest Moon, released by the independent label Big Elm Records. The album featured tunes like "Your Man in the Middle," "I Never Was Too Much," and "Tears of Yesterday." The group's music moves from fun and energetic to serious and deliberate, stirring in classic bluegrass and roots country in a way that makes each song original and the style all Gibson Brothers. In 1995, a performance at Owensboro, Kentucky, landed the group a contract with Hay Holler Records. A year later, the Gibson Brothers released Long Forgotten Dream. With numbers like "Good as Gold," "Little Man in the Mirror," and "I Don't Know What to Do," the album did well enough to earn a place on the bluegrass charts, holding ground there for months. The title song made it into the Top 30 of the Bluegrass Unlimited chart, reaching number ten.
In 1998, the album Another Night of Waiting was released. One of its tracks, "She Paints a Picture," climbed even higher on the charts than its predecessors. In October of that same year, the Gibson Brothers signed on with the Ceili Music label owned by Ricky Skaggs, who produced the group's next album. Also in 1998, the Gibson Brothers were named the IBMA Emerging Artist of the Year. Two years later, the band issued the playfully bittersweet Spread Your Wings. Bona Fide, which appeared in 2000, marked their first for Sugar Hill; it included covers of the Band's "Ophelia" and Gordon Lightfoot's "Long Way Back Home," the latter of which served as the title track for their fifth album. The band released Red Letter Day in 2006, followed by Iron and Diamonds in 2008, both on Sugar Hill.
In 2009, the Gibsons released Ring the Bell, the first of a three album contract with Compass Records. Help My Brother followed in 2011, with a guest cameo by Claire Lynch, and 2013's They Called It Music featured the group's trademark combination of original songs sequenced amid standards to extend the bluegrass tradition.
The Gibson Brothers issued Brotherhood in early 2015; it was their first all-covers record, and featured songs by the Everly Brothers, the Louvin Brothers, Jesse McReynolds, Ralph Stanley, Bill Church, and the York Brothers, as well as the Blue Sky Boys. It was their debut offering for the Rounder label. In the Ground, their second album for the label, arrived in the spring of 2017.