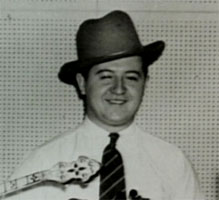 US Country fiddler born Howard Wilson Forrester, 31 March 1922, Vernon, Hickman County, Tennessee, d. 1 August 1987, Nashville, Tennessee, USA. In 1933, the youngest of four Forrester boys, he was struck down by rheumatic fever and during eight months’ convalescing, he learned to play a fiddle that his grandfather had acquired during service in the Civil War. Both his father (who died in an accident on an unmanned rail crossing in 1927) and an uncle were competent fiddlers and he learned much from his Uncle Bob. In the early 30s, he and brothers Clyde (guitar) and Joe (guitar, bass) began to play for local square dances. In 1936, after the family had relocated to Nashville, he played with a group on a local station. In 1938, he and Joe were playing on the Grand Ole Opry, as members of Harold Goodman’s Tennessee Valley Boys. It was Goodman, a founder of theOpry singing trio the Vagabonds, who nicknamed him Howdy. Greatly influenced by Opry star Fiddlin’ Arthur Smith, he left the Opry and played with various groups in Oklahoma and Texas where, in 1940, he met and married Billie Russell, a multi-instrumentalist and singer, who worked under the name of Sally Ann. They returned to Nashville, where between 1940 and 1943, he worked with Bill Monroe, until called for service with the US Navy in World War II (his wife continued to work with Monroe during the time he was away). When discharged in 1964, he moved to Texas, where he played with various bands and on WRLD Dallas. He recorded some Mercury Records sides and worked with fiddler Georgia Slim (b. Robert Rutland, 1916, d. 1969), whom he knew from his late 30s days on theOpry, on theTexas Roundup. In 1949, he returned to Nashville, where he worked on the Opry with Cowboy Copas, until he became a member of Roy Acuff’s Smoky Mountain Boys, in 1951. This marked the start of a long association with Acuff that lasted until his death. He continued to play the Opry but stopped touring with Acuff in 1963 and from 1964-67, he worked as a booking agent and, later, on other administrative duties for Acuff-Rose Music. In 1967, he announced that he would not play professionally again but within three months, he was once again with Acuff on the Opry. In the middle of 1983, continuing chest pains gave rise for concern because of the rheumatic fever he had suffered as a boy and he retired from all but his Opry appearances with Acuff. In late 1986, he had major surgery for the removal of his stomach when he was found to have cancer. To everyone’s amazement, he was soon playing again, and continued to play the Opry with Acuff until mid-June 1987, finally passing away at his home on 1 August that year. He is justifiably rated one of country music’s finest fiddlers and is especially remembered for his exceptional ability to perfect twin fiddle technics, which he first played with Georgia Slim but later developed further on recordings with Kenny Baker and Chubby Wise. Apart from his countless recordings with Acuff, he made solo recordings for several labels including Hickory, Stoneway, Capitol and MGM Records.