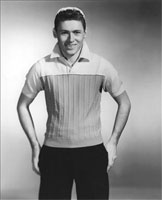 Frankie Ford was the adopted son of Vincent and Anna Guzzo, who named him Francis Guzzo. He was born in Gretna, Louisiana, on August 4, 1939, won a scholarship to nearby South-Eastern College, Hammond, and whilst there formed a band called the Syncopators with some other students. Frankie was the singer and piano player.
One night after a local gig, Frankie was introduced to Joe Caronna, who was the New Orleans distributor for Ace Records. Asked if he was interested in making a record, Frankie's answer was, of course, “yes”. Caronna was so impressed with Frankie that he became his manager and set up his first recording session at Cosimo Matassa’s studio. The result of that Ace Records session was Frankie's first regional hit, ‘Cheatin’ Woman’ (549). The follow-up release was ‘Sea Cruise’, an exuberant rocker backed with an equally energetic ‘Roberta’, a sole million seller for Frankie.
‘Sea Cruise’ is a landmark in studio trickery. Sometime around the end of 1958, Huey Smith and the Clowns, featuring Vocalsist Bobby Marchan, travelled from their base in New Orleans to Jackson, Mississippi, to cut some tracks with a local record distributor, Johnny Vincent, owner of Ace Records. Ace had already scored a national hit for Smith woth his ‘Rockin’ Pneumonia And The Boogie Woogie Flu’ and Vincent hoped to find more gold amongst the pianist/songwriter’s store of novelty R&B tunes.
Vincent liked two of the Clowns’ tracks, ‘Loberta’ and ‘Sea Cruise’, but didn’t think Marchan’s Vocalss were up to scratch, so he brought in Frankie Ford. Ford wasn’t a great singer but his Southern/Italian accent lent him a potential teen appeal akin to Bobby Darin and Dion, something that could not be said of a band named after a pianist and fronted by a black transvestite. So, without consulting Smith or Marchan, Vincent put Ford’s voice over the Clowns’ tracks. Ford wound up with a national hit and a brief period on the road fronting Smith’s band. Smith wound up with a couple of important copyrights (‘Loberta’ became the pounding ‘Roberta’). ‘Sea Cruise’ reached No.14 in the US chart.
Frankie’s other Ace releases included ‘Alimony’ (566), Time After Time’ (580), ‘Chinatown’ (592) and ‘Ocean Full Of Tears’ (8009).
In 1960, Frankie signed with Imperial records after they approached him with an offer he couldn't refuse. Produced by Dave Bartholomew, Frankie's first Imperial release was ‘You Talk Too Much’, a cover of Joe Jones’ version on Roulette Records. Imperial released several other Frankie Ford records, including ‘Seventeen’, ‘Saturday Night Fish Fry’, ‘Dog House’, ‘The Groom’, ‘Let Them Talk’ and ‘A Man Only Does’.
In 1962, Frankie was drafted into the U.S. Army and continued to entertain as a member of Special Services throughout the United States, Korea and Viet Nam. After his discharge from the Army he continued to record for various labels. Doubloon Records in New Orleans issued ‘I Can’t Face Tomorrow’, arranged by Allen Toussaint. During the ’70s and ’80s he recorded for Paula, Cinnamon, ABC and Briarmeade Records. In 1995 Frankie returned to Ace to record a new album, ‘Hot And Lonely’.
He was inducted into The Louisiana Hall of Fame and received the Lifetime Achievement Award from The South Louisiana Music Association. The legendary rock n' roll pianist and performer continues to entertain the masses all over the world in concerts, night clubs, casinos and festivals. He died September 28, 2015.