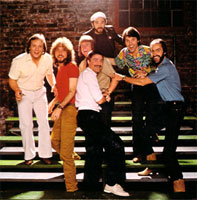 Among rock listeners, Exile is remembered as the one-hit wonder responsible for 1978's number one smash "Kiss You All Over." However, in the early '80s, the Kentucky-bred band reinvented itself as a country outfit -- and a hugely successful one at that. Exile was actually formed all the way back in 1963 in Berea, KY, by singer/guitarist J.P. Pennington, the son of onetime Coon Creek Girl Lily May Ledford. At that time, they were a rock & roll combo known as the Exiles, and got their first exposure by playing some Kentucky dates during 1965-1966 with the Dick Clark Caravan of Stars package tour, which featured pop stars like Brian Hyland, Tommy Roe, and Freddy Cannon. The group relocated to Lexington, KY, in 1968 and switched musical styles several times, also recording singles for labels ranging from Columbia to smaller local imprints. Their name was shortened to Exile in 1973, at which point the group featured leader/guitarist Pennington, lead singer Jimmy Stokley, keyboardist Buzz Cornelison, bassist Kenny Weir, and drummer Bob Jones. That same year, they issued a self-titled album on Wooden Nickel, and their strong regional popularity eventually led to a deal with Atco in 1977, when they scored their first pop-chart entry with the minor hit "Try It On."
Exile subsequently switched to Warner Bros., with a lineup that now featured Pennington, Stokley, Cornelison, second keyboardist Marlon Hargis, bassist Sonny LeMaire, and drummer Steve Goetzman. Their 1978 label debut, Mixed Emotions, produced an enormous hit in the disco-tinged pop number "Kiss You All Over," which topped the charts and also proved to be their only major success. After a few follow-up singles flopped, Exile returned to the clubs of Kentucky and completely revamped their sound, especially when lead singer Stokley departed in 1980. He was replaced by singer/guitarist Les Taylor, who helped spearhead the group's transformation into a country band with a strong Southern rock flavor. In the meantime, some of their songs were covered for hits by major country artists like Janie Fricke ("It Ain't Easy Being Easy") and Alabama ("The Closer You Get," "Take Me Down"). Helped by this exposure, the new Exile signed with Epic in 1983, and soon notched their first Top 40 hit on the country charts with "High Cost of Leaving." By this time, Cornelison had left the group.
Over the next few years, Exile tore off an astounding streak of chart-topping country hits. 1984 brought "Woke Up in Love," "I Don't Wanna Be a Memory," and "Give Me One More Chance"; 1985 duplicated that success with "Crazy for Your Love," "Hang on to Your Heart," and "She's a Miracle," with Lee Carroll now in place of Hargis. Though the next three years didn't find the band topping the charts with such regularity, they did score several more number ones: 1986's "I Could Get Used to You" and "It'll Be Me," 1987's "She's Too Good to Be True," and 1988's "I Can't Get Close Enough." Les Taylor subsequently left the group for a solo career (replaced by Mark Jones) and had a couple of minor hits on Epic; Pennington fared much the same on MCA when he also departed in 1990. The remainder of Exile replaced him with Paul Martin and attempted to soldier on with Arista. They actually did land a couple of Top Ten hits in 1990 with "Nobody's Talking" and "Yet," both co-written by Sonny LeMaire and producer Randy Sharp. However, their success was fleeting, and Arista dropped them after their second album. The group disbanded in 1993, playing a farewell concert in Lexington with numerous past members rejoining. By 1996, Pennington and Taylor had reunited to tour the nostalgia circuit with a new Exile lineup.