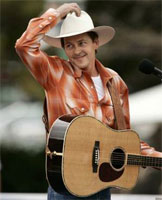 Ty England may have struck out on a solo career in 1995 to some success, but to most new country fans he was most recognizable as Garth Brooks' touring guitarist during the height of Brooks' stardom. Raised in Oklahoma, England began playing guitar as a child, teaching himself the instrument on his grandfather's guitar. Over the course of his childhood and adolescence, he delved deeply into country, learning the work of classic singers like Roy Acuff and Hank Williams, as well as contemporary stylists like Don Williams and Keith Whitley. While he was in high school, England sang with a number of bands in addition to the school choir. Following graduation, he attended college at Oklahoma State. During the night, he sang at a campus coffeeshop. One night, he met a fellow student by the name of Garth Brooks. The two became roommates and began playing music together. Eventually, England's grades began to slip, so his parents took him out of school and got him a job back at home. Working at night, he finished his marketing degree, but instead of pursuing that degree, he had a job as an auto plant representative.
As he was working at the auto plant, he received a call from Brooks, who had just signed a record contract in Nashville. England immediately moved to Nashville and became Brooks' guitarist, backup Vocalsist, and on-stage comedic foil. After six years, he sought out his own record contract with the assistance of Garth Fundis, a record producer for RCA. Fundis helped England sign a solo deal with RCA and the guitarist released his eponymous debut album in the summer of 1995. The first single from the record, "Should've Asked Her Faster," peaked at number three, while the second single, "Smoke in Her Eyes," became a lesser hit. He followed with Two Ways to Fall in 1996, resurfacing four years later with Highways & Dance Halls. Alive and Well appeared in 2007.