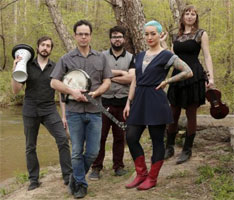 After Leonard Podolak's band Scruj MacDuhk broke up, the Appalachian-style clawhammer banjoist decided that this gave him the perfect opportunity to start another group, one that would fuse eclectic modern sounds with traditional roots. In 2002, along with lead singer Jessica Havey (who brought blues influences with her), fiddler Tania Elizabeth (who played in the French-Canadian style, among others), and guitarist Jordan McConnell (who had studied Celtic guitar), the Duhks self-released their debut, Your Daughters and Your Sons, in Canada in 2002 (it was then re-released in the States the following year). The album did well enough to bring the band a contract with North-Carolina-based Sugar Hill Records, which issued the Duhks' — who had since added Latin-influenced percussionist Scott Senior — self-titled Béla Fleck-produced record in 2005. The next year Migrations, produced this time by labelmate and contemporary bluegrass stalwart Tim O'Brien, came out, followed by an extensive tour and an appearance at 2007's MerleFest. Not long after, Jessica Havey and Scott Senior left the band. Sarah Dugas and her brother Christian Dugas filled the vacant Vocalsist and drummer roles, and the new band settled down in Nashville to prepare songs for a new album with producer Jay Joyce. Fast Paced World was released that August and the group made immediate plans to tour. Conscious of the amount of waste accumulated on the road, the band started an environmentalism initiative called The Duhks Sustainability Project, complete with a website and mission statement that encouraged musicians to be greener by using biodiesel fuel, wearing earth-friendly cosmetics, and eating organic foods.