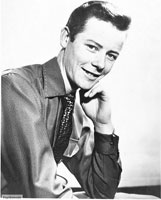 England during the late '50s had its equivalents to Frankie Avalon and Fabian, teenage boy singers whose sounds were specifically tailored to appeal to the most romantic sides of the young female psyche and not offend their parents. Craig Douglas was one of the better of these and has proved one of the most enduring, still performing more than 40 years after cutting his first record.
Born Terry Perkins on the Isle of Wight, he was one of a pair of twins (and those twins were one of three sets among nine children). His mother sang well, one of Douglas' sisters performed on the Isle of Wight, and he'd reportedly begun trying to sing while still in the crib. An indifferent student, he preferred athletics and being outdoors, which led to his volunteering during a school holiday to help the milkman make his deliveries.
It was the latter brief diversion that got the boy labeled the Singing Milkman at the outset of his career. At 16, his mother entered him in a local talent contest and he won by singing "Love Letters in the Sand." He got to a final round, where he specifically avoided doing the standard Elvis Presley imitations that his competitors presented. This led to an appearance at a variety show on the island, where he was seen by London agent Bunny Lewis, whose wife was performing on the same bill. She, in turn, was impressed with the boy's poise and professionalism. Lewis arranged for singing lessons for the 16-year-old and began grooming him for a career on the stage in London. He also acquired the name Craig Douglas.
His breakthrough came on The Six-Five Special, then the only real showcase for rock & roll on British television. Douglas was booked on the show the same week that Cliff Richard and Joe Brown appeared, but he made an impression even in their company: A few days later, he was presented with two huge sacks of fan mail from the performance. The Six-Five Special led Douglas to a recording contract and a string of successes. Much of Douglas' career was spent at EMI, for which he had a number one hit with his version of "Only Sixteen," but also charted very high with "A Teenager in Love," "The Heart of a Teenage Girl," "Pretty Blue Eyes," and "When My Little Girl Is Smiling."
Douglas wasn't really a rock & roll singer, his diction being too good and his delivery too straight-ahead for that designation. His early records call up images of Ricky Nelson but, like a lot of young British singers of his era, he quickly aimed for a more mature audience. His singing was very emotive but also very clean. He was obviously more comfortable with dignified pop music, such as "Time," than with the more rocking numbers like "Ring-A-Ding" that he was occasionally called upon to record, with its slurred lyrics, honking saxes, and loud electric guitars (although Douglas acquitted himself well in that setting).
He made the usual moves, appearing on film soundtracks (Two and Two Make Six) and in movies (It's Trad, Dad; A Painted Smile), as well as numerous television shows. Douglas' appearance alongside his EMI stablemate Helen Shapiro in It's Trad, Dad (which was Richard Lester's first feature and a dry run for A Hard Day's Night) showed off his strengths and weaknesses. He was charismatic simply based on his good looks, but was rather a stiff on camera as an actor, especially next to the vivacious Shapiro (who was also about five years younger than the then 21-year-old Douglas). Rock & roll was just another musical genre to Douglas, which is not to say he was wrong, it's just that antique numbers like "It All Depends on You" or "Five Foot Two, Eyes of Blue" done straight will never resonate the same way "Dream Lover" or "Rainbows" will to listeners born after 1945.
Douglas' time on the English charts ended in 1962 and his major recording career came to a halt a year later with the advent of the Liverpool sound, but he continues to perform regularly in clubs, on cruises, and in cabarets, as well as international tours. Indeed, well into the 1990s, he had an annual month-long booking in Hong Kong. He's a fondly remembered and talented exponent of England's early flirtation with rock & roll.