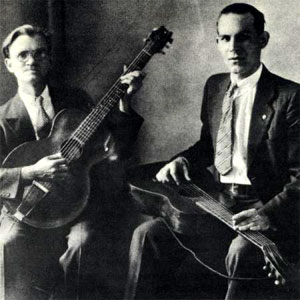 As tough as the life of a professional musician must have been in the '30s, the plight of a typical Carolina millworker was a whole lot worse. This was the background that Dorsey and Howard Dixon were born into, as they and their family all worked in the mills of Darlington, Lancaster, and Greenville, SC, as well as East Rockingham, NC. Dorsey was born October 5, 1897, and his brother on June 9, 1903. Music was an outlet from the long hours, lousy pay, and miserable factory conditions, with the workers often picked on by their bosses for being so-called hillbillies, and persecuted by local police for being so-called communists. Perhaps a career in country music was inevitable for hillbilly communists and it surely must have seemed like it would be more rewarding. At any rate, Dorsey picked up guitar at 14 and switched to fiddle later. When his little brother also figured out chords on the guitar, the two put together a fiddle-guitar duo, although the older brother continued practicing guitar. The most important musical influence on the Dixons was a local guitarist named Jimmy Tarleton, who had been a member of a successful duo, Darby and Carleton. The Depression had sandbagged this duo's career, so Tarleton had returned to the Little Hanna Pickett Mill in East Rockingham and his old job as a textile worker. He made friends with the brothers and the talk frequently turned to music, with lots of song trading going on. The brothers flipped over Tarleton's slide-guitar sound, which was much more heavily influenced by black blues styles. A strength of the Dixon Brothers' sound inevitably was the blues influence they filtered down through their friend, the result being a bit less of an overt blues influence, but plenty of stylistic shading. Howard also switched instruments because of his new friend, so enamored was he with the sound of the National steel. This in turn had an effect on Dorsey's guitar style. He ditched the flatpick and began working out his own approach to the instrument. Tarleton later repaid the debt by recording "Weaver's Blues," his own version of a Dixon Brothers song entitled "Weaver's Life." The Dixon Brothers began performing in 1932 at local shindigs, but really began their professional career two years later on the WBT Saturday Night Jamboree. This was a popular show and led to work outside the area and eventual recording opportunities with Victor. The company taped more than 60 numbers between 1936 and the close of the decade. Legend has it that at one Dixon Brothers recording session, the brothers Bill and Earl Bolick walked by the studio for an audition and were so frightened by the intense Dixon Brothers sound that they fled, later regaining their composure to do rather well as the Blue Sky Boys. The recordings were certainly not flops by any means, but when the contract with Victor ran out and the second World War began, the brothers basically retired from music. Dorsey was a loom-fixer the rest of his life, retiring in 1951. In 1960 Howard died on the job, but a year later Dorsey felt fit enough to make some new recordings and eventually to perform at the Newport Folk Festival, where he was introduced to the crowd by folksinger Pete Seeger. The elderly statesman did so well he was invited back to the festival the next year. He did a new record for Piedmont as well as the archives of the Library of Congress, but neither was released commercially. Keeping up a schedule of concerts was more than he could handle at his age. He retired to Florida and died in 1968 at the age of 71.