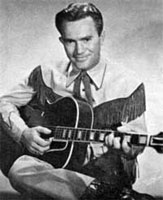 Inducted into the Nashville Songwriters Hall of Fame in 1975, Danny Dill is one of country music's greatest songsmiths. His tune, "Long Black Veil", written with Marijohn Wilkin, has been recorded by everyone from Lefty Frizzell and Johnny Cash to the Band, Jerry Garcia and Jason And The Scorchers. Bobby Bare scored a major hit with his song, "Detroit City", in 1963. Both "Long Black Veil" and "Detroit Hits" have become international hits, translated and recorded in more than two dozen languages.
Additional songs by Dill have been recorded by Carl Smith, George Morgan, Eddy Arnold, Willie Nelson, Ray Price, Cowboy Copas, Faron Young, Billy Grammer and Jim Reeves.
A native of Tennessee's Carroll County, Dill was only twenty-one when he, and his wife, Annie Lou, were invited to join the Grand Ole Opry in 1946. During the next dozen years, they toured with Opry and road shows, opening shows for such country artists as Ernest Tubb, Eddy Arnold and Hank Williams.
The first songwriter to sign with the Nashville-based Cedarwood Publishing Company, in 1952, Dill became a writer/consultant for Buckhorn Music in the mid-1970s.
Dill has made guest appearances in a number of music videos including Steve Wariner's "Tips Of My Fingers" and Clint Black's "Put Yourself In My Shoes".