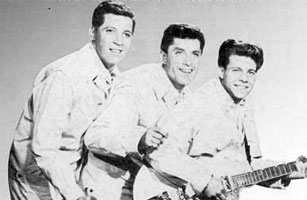 The Detergents got a Top Twenty hit in early 1965 with one of the wittiest rock parodies ever heard to that point, "Leader of the Laundromat." The takeoff on the then-recent Shangri-Las' smash "Leader of the Pack" turned the story around so that a guy was dating a leader of a laundromat, rather than being a tale of a tough chick dating a motorcycle gang chief. The track was pretty musically solid, too, with well-placed interjections of sound effects of a revving motorcycle that wouldn't start and low, dramatic booming piano notes, answered by the record's key punch line: "Who's that banging on the piano? I dunno!" Its topical satire also meant it dated so quickly that it rarely made the playlists on oldies stations, but it became a big favorite on Dr. Demento's program in the '70s. It may be stretching things, but the relatively hip and sophisticated parody of "Leader of the Laundromat" in some ways foreshadowed the kind of ironic-comedic pop/rock pastiches of Frank Zappa, though Zappa took it much further lyrically and musically."Leader of the Laundromat" was written by Paul Vance and Lee Pockriss, whose previous credits included Perry Como's "Catch a Falling Star" and Brian Hyland's inane 1960 chart-topper "Itsy Bitsy Teenie Weenie Yellow Polkadot Bikini." To perform "Leader of the Laundromat," the pair recruited Ron Dante, Vance's nephew Danny Jordan, and Tommy Wynn. The single was quickly followed by an album, The Many Faces of the Detergents, which was also filled with silly parodies of recent rock and pop hits, though the rest of the songs had far less imagination and humor than "Leader of the Laundromat." The Detergents also had some subsequent singles, again in the satirical vein, like "Double-O-Seven" (mocking James Bond) and "I Can Never Eat at Home Anymore" (spurred by Shangri-Las' hit "I Can Never Go Home Anymore").The Detergents were actually not a studio-only group, as some might assume. They toured and appeared in a 1966 movie, Don't Worry I'll Think of a Title, before breaking up. While Ron Dante didn't exactly become well-known to the public, his voice was subsequently heard by many millions of people, as he was the lead singer (as a session Vocalsist) on the Archies' hits, including "Sugar, Sugar." Dante was also the voice of the Cuff Links, who had a Top Ten hit in 1969 with "Tracy," written by none other than Paul Vance and Lee Pockriss. Dante also sang many commercial jingles, and produced records by Barry Manilow, Irene Cara, Cher, and others.