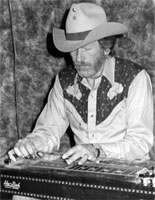 Along with Shot Jackson and Buddy Emmons, legendary sideman Jimmy Day stood among the finest steel guitarists ever to grace country music; "Mr. Country Soul," he and his guitar, the legendary Blue Darlin', lent their artistry to records from performers ranging from Webb Pierce to Ray Price to Willie Nelson. Born January 9, 1934, in Tuscaloosa, AL, Day harbored dreams of a career in country music from childhood onward; his initial attempts to learn guitar proved frustrating, however, when he faced considerable difficulty with his fret work. His problems were solved in 1949, when he saw Jackson providing steel support for the Bailes Brothers; that Christmas, Day received his first steel guitar, and by the age of 16 he was regularly performing at area honky tonk shows.
After graduating high school, in 1951 Day successfully auditioned for the Louisiana Hayride radio program; he soon began working with Pierce, with whom he recorded his first sessions. He soon introduced Pierce to pianist Floyd Cramer, whom Day had known since junior high; these sessions produced the Pierce smash "This Heart Belongs to Me," which hit number one just prior to Day's 18th birthday. In the spring of 1952, he also began a six-month stint backing Hank Williams; in November -- less than two months before his tragic death -- Williams asked Day to join a new band he planned to assemble in the year to follow. In the wake of the tragedy, Day worked with Red Sovine and Jim Reeves, and overdubbed a handful of posthumous Williams recordings. He also appeared on Mitchell Torok's 1953 hit "Caribbean."
With the advent of pedal steel guitar in 1954, Day began moving away from lap steel during a tenure with Lefty Frizzell; among his final sessions playing lap steel was a Louisiana Hayride date backing Elvis Presley. In early 1955 Presley assembled a backing band comprised of Day, Cramer, guitarist Scotty Moore, bassist Bill Black, and drummer D.J. Fontana that remained his supporting unit for much of the year; when Presley relocated to Hollywood he invited the band to join him, but both Day and Cramer declined in order to pursue careers with the Grand Ole Opry. In 1956 Day switched permanently to pedal steel and appeared on Ray Price's "Crazy Arms"; he soon relocated to Nashville to join Price's band, the Cherokee Cowboys, and by extension became a member of the Opry. He also convinced Jackson to begin manufacturing his own pedal steel guitars, and soon the Sho-Bud, the first classic electric pedal steel, hit the market; with it came Day's first steel to bear the Blue Darlin' name.
In 1955 Day cut his first instrumental single, "Rippin' Out"; over the next two years he toured extensively with Pierce and also appeared infrequently with the Cherokee Cowboys, Ernest Tubb's Texas Troubadors, and Jim Reeves' Blue Boys. In 1959, Day rejoined Price, where he was teamed with a young bassist named Willie Nelson; when Nelson broke from Price three years later, he took Day with him. By 1963 Day also began performing with George Jones, and released his debut solo LP, Steel and Strings. In the years to follow he tenured with the likes of Ferlin Husky, Leon Russell, Clay Baker, Charlie Louvin, and Don Walser, and also cut a number of records, including All Those Years, For Jimmy Day Fans Only, and Jimmy Day and the Texas Outlaw Jam Band. He was inducted into the International Steel Guitar Hall of Fame in 1982.