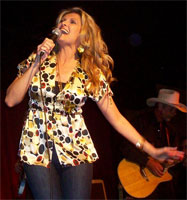 A protégée of Reba McEntire, Linda Davis is best-known for a Grammy-winning duet with her mentor, "Does He Love You." Davis grew up in Texas and was singing on local radio by the age of six. She moved to Nashville in 1982 and teamed up with Skip Eaton as the duo Skip & Linda; together they had three minor hit singles, the biggest of which was "If You Could See You Through My Eyes." Davis subsequently worked as a commercial-jingle singer before catching on as a backup vocalist with Reba McEntire. Davis had a minor chart single in 1988 with "All the Good Ones Are Taken," but didn't record her debut album until 1991, when she signed with Liberty. In a Different Light produced two more minor hits in the title track and "Some Kinda Woman," but it wasn't a big seller; nor was the self-titled follow-up, which appeared in 1992. However, 1993 brought Davis (and McEntire) to the top of the country charts thanks to "Does He Love You," which won a Grammy for Best Country Vocals Collaboration. With the newfound exposure and a deal with Arista, Davis' next album, 1994's McEntire-esque Shoot for the Moon, charted in the country Top 30, as did its follow-up, 1996's poppier Some Things Are Meant to Be. She switched to DreamWorks for 1998's I'm Yours, which featured new tracks and some previously released material, like the Prince of Egypt soundtrack offering "Make It Through."