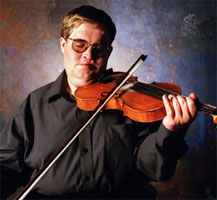 Henryville, IN, native Michael Cleveland quickly became known as one of the hottest attractions in bluegrass, aptly achieving recognition for his blistering and unconventional fiddle style, not for the fact that he is blind. His love for bluegrass began early, and in 1990 he first appeared at Bill Monroe's renowned Bean Blossom Festival. In 1993, at the age of 13, he appeared as fellow fiddler Alison Krauss' guest at the Grand Ole Opry, soon appearing on A Prairie Home Companion and playing before the U.S. Congress. In May of 1999, after graduating from the Kentucky School for the Blind, Cleveland joined Dale Ann Bradley and the Coon Creek Girls. Along with his work with the Coon Creek Girls, he released two independent CDs — One for Mac dedicated to Kentucky fiddler Mac McBane, and Sawing on the C String. He joined Rhonda Vincent and the Rage in February 2000, and his work on the Rounder album Back Home Again earned him the prestigious International Bluegrass Music Association's Instrumental Performer of the Year in the fiddle category. Rounder Records next released two Cleveland albums, Flame Keeper in 2002 and Let 'Er Go, Boys in 2006.