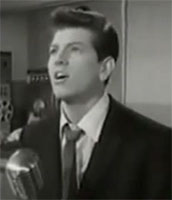 To most rock & roll listeners who recognize it at all, the name Jimmy Clanton likely evokes one image -- the slightly stiff but honest performance that Clanton gave in Go Johnny Go, the 1959 Alan Freed-produced jukebox movie. It would be difficult, based on the evidence of that film, to tell that Clanton was one of the most serious and complex of the generation of teen idols in which he is usually grouped, standing head and shoulders above the likes of Fabian, Bobby Rydell, and others, but Clanton was a dedicated R&B enthusiast and singer with a great voice and a genuine feel for New Orleans music. What's more, he also wrote many of the songs that he recorded -- a relative rarity among white singers of his day.
Clanton was born in Baton Rouge, LA on September 2, 1940. He reached his teen years just as R&B was starting to find an audience among younger whites. By the time he formed his first band, the Dixie Cats, in 1956, he was emulating the sounds of Fats Domino, Little Richard, and Elvis Presley, and his other influences included Johnny Ace. His rivals in those days included a young John Fred, more than a decade away from his chart-topping "Judy in Disguise (With Glasses)" and Johnny Ramistella, later known as Johnny Rivers and still eight years from his big break. Clanton joined forces with a rival bandleader, pianist Dick Holler (later the author of "Abraham, Martin and John"), in the Rockets, a combo that was hot enough to justify a 1957 trip to New Orleans and a visit to Cosimo Matassa, who owned the only recording studio in the city.
Matassa was taken with Clanton's easygoing charm and his way with a song -- he sang R&B from the heart, and he had an outgoing, likable personality. Matassa signed both Clanton and Holler under his management, recorded each one fronting the Rockets, and then got them both recording deals with Mississippi-based Ace Records in September 1957.
At first, Clanton stood somewhat in the shadow of Huey "Piano" Smith, who was Ace's golden boy with "Rockin' Pneumonia and the Boogie-Woogie Flu" under his belt and "Don't You Just Know It" waiting in the wings. Gradually, however, Clanton's "Just a Dream" began to gain airplay and sales, starting in the South and then building elsewhere. Eventually, the record reached number four on the Billboard Pop chart and topped the R&B charts in 1958, and suddenly Clanton was one of Ace's hottest properties. Appearances on American Bandstand followed, along with his first bookings outside of the South. There were engagements at the Hollywood Bowl and performances on Freed's package tours, which in turn led to Clanton's starring role in the second of Freed's two rock & roll films, Go Johnny Go, in which Clanton was seen performing "Ship on a Stormy Sea," "My Love Is Strong," and "It Takes a Long, Long Time." What's more, he held his own in a cast that included Chuck Berry, Jackie Wilson, Sandy Stewart, the Flamingos, the Cadillacs, Jo-Ann Campbell, Eddie Cochran, and Ritchie Valens.
Clanton's next release was a double A-side single: "Letter to an Angel" (which owed a lot in feel and content to Johnny Ace's "Pledging My Love") and "A Part of Me," both of which charted, though not high. He reached number 33 with "My Own True Love," which was adapted from the main title music of Gone with the Wind -- this was, ironically enough, Clanton's first single that he didn't write or co-write (usually with Matassa). It wasn't until 1960 that he again reached the Top Ten, with "Go Jimmy Go," written by Doc Pomus and Mort Shuman, which hit number five. By that time, the teen idol boom was going full-force and Clanton was firmly cast in this role -- he was a natural with his good looks and easygoing personality, and his music was reshaped from R&B to more of a softer White rock & roll vein. He still wrote an occasional song, but Clanton increasingly turned to outside writers, including Pomus and Shuman and Neil Sedaka and Howie Greenfield.
In early 1961, Clanton was drafted, and he spent the next two years in the U.S. Army. Ace did its best to keep his name in the public eye with a series of single releases. Those early-'60s singles, including his own "Don't Look at Me" and Dr. John's "Because I Do," were pretty powerful rockers, and marked something of a return to Clanton's original New Orleans-based sound, in the wake of his success with pop ballads.
His return to performing coincided with the release of his last major hit, "Venus in Blue Jeans," which peaked at number seven in mid-1962, maintaining his status as a mainstay of the Mississippi-based label. He had one further chart entry with "Darkest Street in Town," but that was the end of Clanton's run of hits. He continued performing even after Ace Records folded in the mid-'60s and later recorded for Phillips, Mala, Laurie, and Imperial, but the British Invasion heralded a shift in public taste that made it more difficult to get steady bookings.
Clanton became a disc jockey in the '70s and performed in an oldies revue of his own, and reportedly had a religious conversion in the '80s. He performed at oldies shows in the '90s with his one-time labelmate Frankie Ford, and his appearances at oldies shows continued during the first decade of the new millennium.