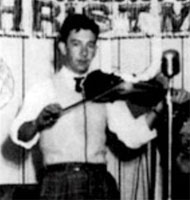 Harry Choates was not only one of the most influential musicians in the history of Cajun music, but one of its most tragic figures. A wild and imaginative fiddler, Choates wrote such classic tunes as the Cajun national anthem, "Jole Blon," and popularized such songs as "Allons à Lafayette." Recording for Gold Star, DeLuxe, D.O.T., Allied, Cajun Classics, Macy's, and Humming Bird, Choates introduced Western swing, blues, jazz, and country music to the two-steps and waltzes of southwest Louisiana's bayous, influencing nearly every Cajun musician who followed in his footsteps.
Like Hank Williams, Choates balanced his musical talents with painful struggle in his real life. An acute alcoholic, he sold the rights to "Jole Blon" for $100 and a bottle of whiskey. His habit of missing concerts led him to be blacklisted by the musicians union in San Antonio and resulted in his band breaking up. His death was equally tragic. Failing to make support payments of $20 a week for his son and daughter following his divorce, he was jailed by a judge who found him in contempt of court. After three days of being forced to curtail his drinking habit, he began beating his head against the cell bars and fell into a coma. He died a few days later on July 17, 1951.
Born in either Rayne or New Iberia, LA, Choates moved to Port Arthur, TX, with his mother in the 1930s. Rather than going to school, Choates spent much of his childhood in bars and taverns, listening to honky tonk and blues records on the jukebox. By the age of 12, Choates was playing fiddle in barbershops for tips.
Launching his professional music career in Cajun bands led by Leo Soileau and Leroy "Happy Fats" LeBlanc, Choates formed his own group, the Melody Boys, in 1946. The same year, he rewrote the classic Cajun tune, "Jolie Blonde," for his daughter, Linda, and recorded it for the Gold Star label. Although the tune became a country hit when covered by Aubrey "Moon" Mullican, Choates had given up all rights to the song and received no further compensation for his composition. Choates and the Melody Boys continued to record at a prolific rate, releasing more than two dozen songs for Gold Star in 1946 and 1947. Adapting the Western swing of Bob Wills & His Texas Playboys to Cajun music, Choates became known as "the fiddle king of Cajun swing."
Although he performed with Jesse James & His Gang on radio station KTBC after the disbanding of the Melody Boys in 1951, Choates suffering ended a few months later. His grave was left unmarked until 1980, when money was raised for a gravestone with the bilingual inscription, "Purrain de la Musique Cajun -- The Godfather of Cajun Music." In the mid-'60s, Cajun musician Rufus Thibodeaux was one of the first to pay homage to Choates' influence when he recorded an album of Choates' songs, A Tribute to Harry Choates.