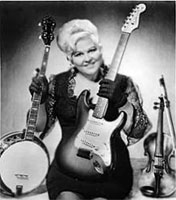 Jean Chapel, born as Opal Jean Amburgey, left her Neon, KY, home at 13 to perform daily with her sisters in the Sunshine Sister Band at Lexington, KY's WLAP in 1938. Even at such a young age, Chapel's personality and star potential came shining through as she sang lead on most songs. She had started in the band at age 11, after her father sold some of his carpentry tools to buy her a banjo. At 15, she began writing songs and would record and publish more than 170 before her death in 1995, songs that were recorded by the likes of Rosemary Clooney, Dean Martin, Patsy Cline, Roy Rogers, and Eddy Arnold. In 1940, the sisters moved to Atlanta's WSB, which gave her the name "Mattie." In 1947, Amber married performer Floyd "Salty" Holmes and the two performed together for years at the Grand Ole Opry, on television, radio, and in concert. Amber recorded as Opal Jean in the early '50s and with her Sunshine Sisters. She became Jean Chapel in 1956 when she began recording rockabilly songs like "I Won't Be Rocking Tonight" with Sun Records, which called her the female Elvis Presley and even released her "Welcome to the Club" on the B-side of an Elvis single. Chapel divorced Holmes and moved to Nashville, where she concentrated on writing through the '60s. She became neighbors with Tammy Wynette, who began recording Chapel's songs and did a duo with her called "Crazy Me." Wynette was also briefly married to Chapel's brother. The Country Music Association named her song "To Get to You" one of the year's five best in 1973.