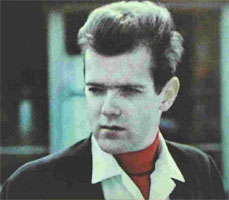 Chicago singer/songwriter Dick Campbell released one of the most ludicrously imitative Bob Dylan-inspired albums of all time, Dick Campbell Sings Where It's At. It came out when Dylan was at the peak of his mid-'60s fame, just after going electric and getting his first hit singles. Campbell made sure that he sounded a lot like 1965 Bob Dylan by using some of the same musicians that Dylan worked with that year; the entire Paul Butterfield Blues Band contributes, with the exception of Elvin Bishop. Other musicians also support Campbell on the record, including Peter Cetera, who would later play with Chicago. Although this LP approximated the instrumental sound of Dylan's early rock records, complete with picked guitar runs and organ, it was far inferior. The blame lay squarely with Campbell, whose songs — and voice — sounded like an amateurish Dylan copy, to the point where it's difficult to determine whether this was a sincere attempt to duplicate Dylan or a Dylan parody. As a curio of the early folk-rock era, though, this rare record definitely has its interest.