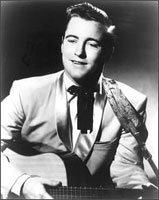 Dorsey Burnette will probably always be best remembered as a member of the Rock 'n Roll Trio in association with his brother Johnny, their work spread between the MCA and Capitol/EMI labels (which took over the Liberty catalog), but he spent most of his time in music as a solo act, whether he was recording or writing songs. Apart from "Tall Oak Tree" and "Hey Little One," he recorded an impressive array of soulful pop and rockabilly numbers, eerily recalling Elvis Presley's 1950s and early-'60s sound (only Burnette's songs are better), most of which are worth owning.