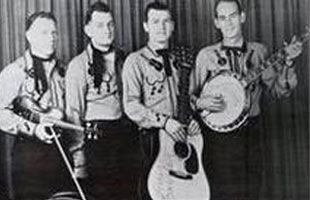 The Barrier Brothers were pioneers of bluegrass music. All three, Herman, Ernest and Henry were born in Hardin, Tennessee, where Herman and Ernest learned to play old-time music when they were young. They started out at a small radio station in Corinth, MS during the early 1950s. Later, the whole Barrier family moved to South Bend, Indiana to find work. There, when not working, they honed their musical skills: Ernest mastered the 5-string banjo, while Herman became an adept bass player. The two taught young Henry to sing lead and play guitar. After Henry grew up, they formed a band that included fiddler Gene Dykes. The Barriers were a semi-professional weekend band and during the '50s mostly played at parks, fairs, and minor jamborees throughout the Midwest. The brothers and their Ozark Mountain Boys finally cut their first record for Ray Earle's independent Armoneer label near the end of the decade. They had two singles and a gospel EP, which led to a major contract with Philips International, where they recorded three albums in as many years. The Barriers were a versatile band, but they didn't get to show it on these albums, as Philips executives insisted on their recording bluegrass standards. After their contract expired, Herman and Ernest returned to Tennessee and Henry remained in Indiana, where he continued to play in various bands. Following Herman's death in 1988, Ernest continued working in his welding business. He continued jamming with local musicians until his death in early 1994.