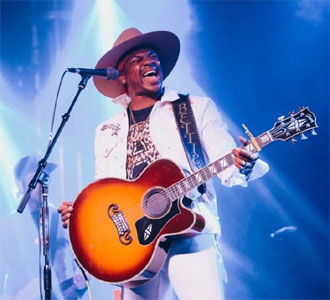 Arriving in the wake of Sam Hunt's and Thomas Rhett's pioneering modern R&B and country fusion, Jimmie Allen adheres to a similar glossy sound that emphasizes melody and grooves in equal measure. This slick, assured style helped lift his 2018 debut album, Mercury Lane, up to number 11 on the country chart. By the time of his second album, 2022's Tulip Drive, he was an established star and a ubiquitous pop culture figure.
Allen started out working behind the scenes in the country music industry in Nashville. He moved there from his native Delaware and began working as a songwriter, landing a few publishing deals; one of his songs even appeared in a Super Bowl commercial. Allen signed with BBR's Stoney Creek Records subsidiary in August 2017 and released "Blue Jean Baby," which was the first single from his self-titled debut EP. Released late in 2017, the set was produced by Ash Bowers and Eric Torres. Named after the street where he grew up, Mercury Lane, Allen's first long-player, arrived in October 2018. It debuted at 11 on Billboard's Country Albums chart upon its release. In 2019 Allen teamed up Abby Anderson for a cover of the Lady Gaga hit "Shallow," and in 2020 he released "This Is Us," a duet with Noah Cyrus. The latter track appeared on his follow-up EP, Bettie James, in July of that year. In early 2021, Allen won New Male Artist of the Year at the American Country Music Awards and later expanded his second EP into the full-length Bettie James Gold Edition. A stand-alone single, "Down Home," arrived early the next year. Allen's second album, 2022's Tulip Drive is named after the street his grandmother lived on and for the first time in his career, the songs are written from a personal perspective. The pop-leaning album features guest appearances from Jennifer Lopez and CeeLo Green.