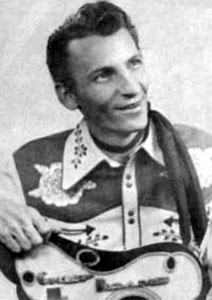 Adam Edward Semeniuk was born in Sturgis, Saskatchewan, in 1929. He started his musical career by performing little local gigs where ever he could. There wasn't much pay involved in them, so he kept different day jobs to pay the bills. One of those many jobs was in a restaurant, which is where he earned the nickname Chef. He later decided to perform under the name Chef Adams.
In 1953, Adams landed steady work as the front man for a group called the Country Rhythm Kings. Over the next three years the band recorded a couple of singles under the Quality Records label. Around 1963, Adams switched from group format to duo, joining forces with fellow artist Yvonne Terry. The team didn't have a lot of success and only remained together for about a year before calling it quits. There were other bands later, like Chef Adams and the Adams Boys, and a few more singles and albums along the way, but by the time the close of the '70s drew near, so did the end of Adams' two-decade-plus career. His last album, Does the Sunshine Still Remember, was released in 1975. His last single, "It's All Gone," appeared in 1979.
Chef Adams passed away on August 28, 2017 in Lindsay, Ontario.