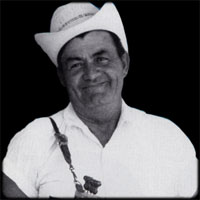 Nathan Abshire helped bring the blues and honky tonk to Cajun music and repopularized the accordion with his recordings during the 1950s and '60s, but still never managed to make a living from his music. Born in Gueyden, LA, on June 27, 1913, Abshire began playing professionally in the 1920s, and he first recorded in the early '30s with Happy Fats & His Rayne-Bo Ramblers. Abshire went to work at the Basile, LA, town dump around that time, and he held the job for most of his working life.
His fortunes began looking bright by 1936, however, when the Rayne-Bo Ramblers began backing him on sides for Bluebird. After serving in World War II, Abshire cut "Pine Grove Blues" — his most famous single and later his signature song — for D.T. Records. He recorded for Khoury/Lyric, Swallow, and Kajun during the 1950s and '60s, meanwhile playing local dances and appearing on sessions by the Balfa Brothers.
A renewal of interest in Cajun and folk music during the '70s gave Abshire a chance to play several festivals and colleges and star in the 1975 PBS-TV Cajun documentary, Good Times Are Killing Me. The title proved prophetic, however, as Abshire fought alcoholism during his last years. Several sessions for Folkways and La Louisienne followed in the late '70s, but he died on May 13, 1981.